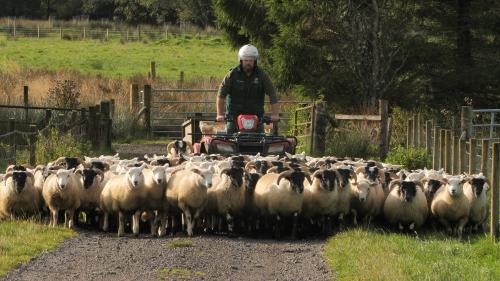 Electronic identification (EID) tags have been compulsory in UK sheep flocks since 2010, and a decade after their introduction, can still be a controversial topic. But these tags, rather than just identifying individual animals, also offer a huge opportunity to improve efficiency and productivity on-farm; allowing a greater understanding of production rates on the farm, and perhaps even in particular fields, providing an early warning of potential problems. This type of precision livestock farming (PLF) is common in the dairy and pig sectors but has not had the same uptake in the sheep industry. The following case study summarises long-term research developing a PLF method for growing lambs and shows the potential for this approach to reduce chemical wormer use, and resistance to them on farms without affecting efficient lamb growth.

All grazing livestock can be infected with gut-dwelling roundworm parasites, which typically cause:

These infections are estimated to cost the European dairy cattle and meat sheep markets in the region of € 404 million and € 120 million per annum, respectively.

Most infections are subclinical (i.e. the farmer may not even notice), and animals are usually infected with several different nematode species at the same time. To date, control of roundworms in production animals has largely been achieved using chemical wormers (anthelmintics), either therapeutically (to treat established infections) or prophylactically (to prevent infection). The widespread, and often indiscriminate, use of anthelmintics has led to the development and dissemination of anthelmintic resistance in small ruminant nematodes.

Anthelmintic resistance is now widespread globally, with resistance to most of the five broad-spectrum anthelmintic classes being reported. The inexorable rise in resistance threatens both the sustainability of livestock production and future food security. Solutions to slow resistance and deal with resistant worm populations on-farm are urgently required.

In response, scientists at the Moredun Research Institute have collaborated with colleagues at the University of Lincoln, New Zealand, to develop a target selective treatment (TST) method, known as the Happy Factor, to identify poorly-growing lambs and select only those for wormer treatment. This PLF approach is designed to be used with electronically tagged, individually identified lambs and electronic weighing and drafting equipment on-farm, to allow pen-side evidence-based decisions on individual lambs. The Happy Factor is calculated based on food availability, the age of the lamb and predicts weight gain targets for each lamb. ‘Happy’ lambs, those that reach the weight target, do not receive treatment. Those lambs that don’t meet the target are treated.

This PLF approach has subsequently been tested on two research farms (Moredun Research Institute and the SRUC Hill & Mountain Research Centre) and several commercial farms, the results of one of which is described below.

This study was conducted on Moredun Research Institute’s farm, with the TST approach being compared with three commonly used worming strategies by farmers. These were when wormer was given to all the lambs either

The experiment was conducted over 6 years, following each year’s lambs for the full grazing season. Lamb body weight and worm egg count were collected from each lamb, every fortnight from May to October each year.

This long-term field study showed that there were no differences in the final bodyweights of lambs in the TST, monthly or strategically wormed groups, even though the TST and strategically wormed groups had used 50% less wormer than used in the monthly treated group. Crucially, the development of anthelmintic resistance was greatest in the monthly treated group and drug efficacy was maintained in the TST group. These results suggest that farmers would not see any return for the extra investment of treating all their lambs every month, compared to strategies which use less wormer. 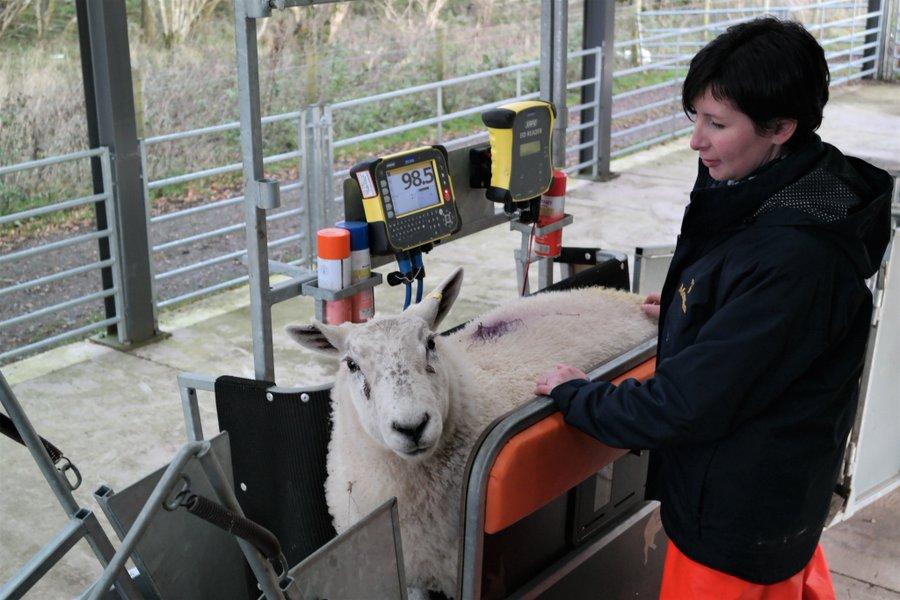 Fi Kenyon, Moredun Research Institute is leading on the development of TST using EID technology, such as the electronic weigh crate at Moredun’s Research Farm (pictured) and the auto-drafting crate at SRUC Hill & Mountain Research Centre

On the SRUC Hill & Mountain Research Centre, Scottish Blackface and Lleyn lambs were compared in 2 different systems. One used EID technology (i.e. an auto-drafting weigh crate) combined with the TST approach; the other used conventional weigh crates, with groups of lambs wormed if the average worm egg counts in the group faecal samples exceeded 500 eggs/g (control).

The research identified that EID-based technology can help sheep management when taking decisions on feeding, worming, drawing animals for slaughter and selection for breeding. The EID technology also saves time and labour for the farmer, reduces handling stress for the animals, reduces paperwork and increases ease and accuracy of recording. The results also showed that a calibrated sheep auto-drafting weighing crate can further ease management time e.g. recording and sorting up to 500 animals per hour. Over the whole year, this can lead to labour savings of 30-40%.

This video is produced by the SRUC Hill & Mountain Research Centre and shows the TST approach in action.

On this farm, the average differences in the net margin between the systems were found to be ~ £4/ewe; meaning for 900 ewes, it would take a minimum of 3 years to pay back an initial equipment cost of £10,000. For lamb worming, the TST approach led to 52% savings in wormer costs and provided up to 75% labour savings, without compromising lamb growth. This led to savings of around £1.60 per lamb. EID technology can, therefore, help improve farm efficiency, welfare and economic margins. 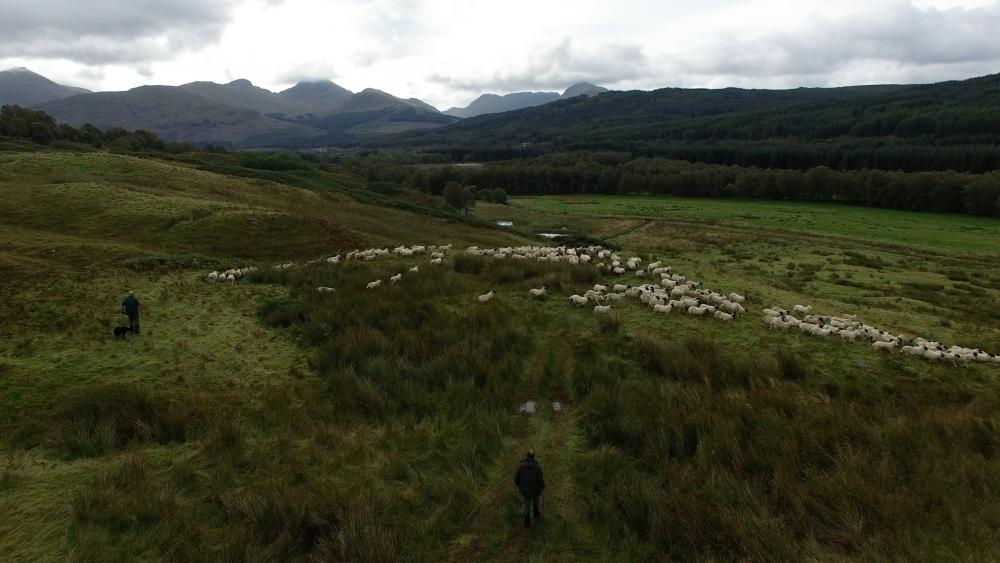 More recently, the Moredun team have joined forces with the Scottish Government-funded QMS and AHDB Monitor Farm Programme and their facilitators at 5 Agri and SAOS, to test the PLF approach on the QMS Monitor farm at Saughland in the Lothians. The system was tested, with the farm running over 200 lambs per hour through the electronic weigh crate and handling system. Of the nearly 550 lambs weighed, 240 failed to reach the weight gain target and so received a drench. On this commercial farm, the approach reduced drug use by 40% whilst maintaining efficient lamb production.

On both the research farms, we saw a 40-50% reduction in wormer use with no negative effects on lamb weight gain compared to traditional worming strategies. Importantly, this targeted approach slowed the development of drug resistance, optimised wormer use and had added benefits for lamb performance: drug efficacy and lower GHG emissions and labour on-farm. We have also demonstrated that EID technology can also help improve farm efficiency, welfare and economic margins. These results also translate to commercial farms: on the QMS Monitor farm at Saughland this approach reduced wormer use in sheep flocks by approximately 40% and slowed the development of drug resistance, without inducing penalties in terms of animal growth rate, a win-win situation.

The technique is being further evaluated as a possible method to monitor welfare. The team have been successful in gaining EU Horizon 2020 funding, and the TechCare project is due to start in September 2020. This highly collaborative project aims to develop appropriate business models using innovative technologies to improve welfare management for all EU small ruminant, to enable farmers to choose animal welfare-friendly products.