A Vaccine Cocktail for Worms: Innovative Responses to the Threat of Chemical Resistance 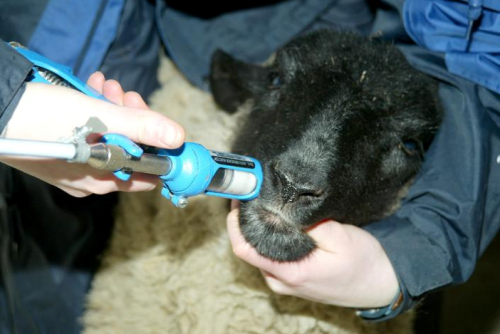 SEFARI scientists are engaged in long term research into the detection and management of anthelmintic (wormer) resistance and the development of practical strategies to help slow its spread. We are making significant progress towards developing a vaccine that will reduce reliance upon chemical treatments and are offering innovative ways of explaining resistance to farmers to encourage best practice. Our research is helping to improve the health, welfare and biological efficiency in Scottish and UK livestock; this will lead to significant reductions in treatment and control costs for farmers, as well as lowering the carbon footprint of the livestock industry.

Livestock grazing outside are exposed to infection by parasitic worms, which are a major constraint on efficient livestock production around the world. In fact roundworms are the most costly endemic disease in the UK; it has been estimated that roundworm infections costs the UK livestock industry well in excess of £84m per year or up to £4.40 extra per lamb to achieve finishing weight.

Teladorsagia circumcincta is one of five roundworms found in sheep in the UK and is the most prevalent species with the capacity to reduce the performance of lambs in temperate regions.

Over the last four decades worm infections in sheep have been controlled by chemical treatments called anthelmintics, also known as wormers, which are chemical treatments. The spread of resistance to the chemical treatments by these worms threatens sustainable livestock production. A top research priority is to bring about immunity in sheep by vaccinating them. Vaccines are also favourable over wormers as they are not associated with chemical residues in meat or have any environmental impact.

Until recently the development of vaccines against these pathogens had been largely unsuccessful despite decades of intense research. SEFARI scientists have developed, designed and tested a prototype vaccine against Teladorsagia circumcincta, as part of a much larger programme of research on sustainable parasite control.

Our research identified a number of key proteins produced by these Teladorsagia circumcincta which allow it to evade the immune response and to survive and multiply within sheep. We have combined these proteins with other parasite proteins, which provoke the protective immune response, to make a “vaccine cocktail” which produces significant but variable levels of immunity against the worms in sheep.

We showed that six to seven month old lambs and older, breeding ewes vaccinated with the prototype vaccine produced significantly fewer worm eggs compared to unvaccinated sheep. The protective effects were less pronounced in some, but not all, younger lambs which may have less effective immunity and are also most susceptible to the production-limiting effects. This prototype offers the highest levels of protection observed for this type of vaccine in the definitive host.

Vaccine development is one element of sustainable parasite control and our scientists are engaged in a large programme of work that also includes the diagnosis of resistance to practical and sustainable resistance management through to improving understanding and encouraging best practice.

To that end, our scientists have teamed up with Blobina Animations to create a short animation entitled ‘War of the Worms.’ The film neatly communicates to farmers the complicated messages around wormer resistance and best practice, such as the key benefits of testing animals to determine the need for treatment and check drug efficacy, as well as the value of using farm-specific information in treatment decisions.

Livestock and equine health industry groups such as Sustainable Control of Parasites in Sheep (SCOPS), Control of Cattle Parasites Sustainably (COWS) and Animal Health Distributors Association (AHDA) are actively promoting the use of this resource to explain best practice and encourage the implementation of these principles.

The outputs of this work will make a great contribution towards the next generation of vaccines for controlling livestock diseases and move us closer to producing the world-first commercially viable vaccine of this kind. SEFARI reseachers have been able to use what they learned during the development of Barbervax®, the first registered subunit vaccine to protect sheep against gut parasite infection from Barber's pole worm. A major goal of our research is to develop new practices, and bring forward innovation, that will help sustain the economic development within the agriculture and food industries in Scotland and the UK. Through a broad programme of work on sustainable parasite control our scientists are helping the livestock industry to better reduce the burden of production-limiting parasitic disease through an improved understanding of how parasites become resistant to wormers, coupled with better diagnosis, and practical, sustainable parasite control strategies. This will help target wormer treatments more effectively and, with the help of novel vaccines deployed in the field, reduce our reliance on chemical treatments. This will ultimately improve the health, welfare and biological efficiency in Scottish and UK livestock and to significant reductions in treatment and control costs for farmers, as well lowering the carbon footprint of the livestock industry.