Assessing the impact of tree diseases on the wider environment 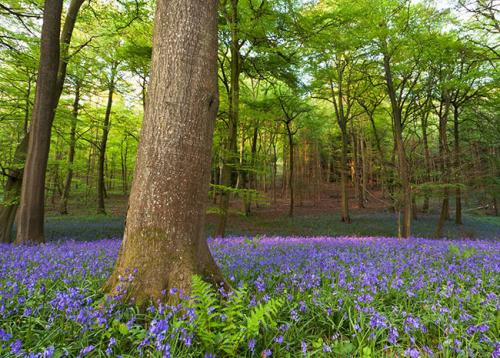 Recently there has been a rapid increase in the spread and number of non-native tree pests and pathogens around the world. Traditionally the impact of tree diseases and pests has been assessed in terms of their impact on forestry and the loss of wood products. However trees, like ash or oak, support a number of other species and their decline may pose significant risks for other species reliant on them. Here we summarise work from across several research projects which have provided woodland managers, for the first time, with lists of the species associated with two of our native trees (ash and oak) currently at risk from disease. This will enable them to identify which species are most at risk,  if ash or oak trees decline on their site and which alternative tree species will support those species at most at risk on their site.

Recently there has been a rapid increase in the spread and number of non-native tree pests and pathogens around the world. A decline in the abundance of a native tree species, such as Ash or Oak can have much wider impacts than just the loss of a tree species and its related wood products.

Trees provide a habitat for many other species that either live in or on the tree, like mosses, lichens, birds and bats; trees also provide an important source of food for many species, such as some mammals and insects. Some species are only found on one host tree and are called “obligate” species.

Obligate species are at greater risk of decline if their host tree is impacted by a disease than species that can use a wide variety of different trees. Tree species also differ in their functioning – providing different levels of shade, nutrient cycling and carbon storage.

One option is to replace the diseased tree with an alternative one; however such a strategy needs to consider how the wider environment will be changed by this replacement species. These replacement trees need to be able to support a similar suite of species and to be comparable to the diseased tree species in its functioning.

For example, the canopies of ash trees allows for some light to shine through to the understory allowing woodland flowers to grow underneath. If you needed to maintain light reaching the understory, then a beech tree would not be a suitable replacement for ash as it casts dense shade and produces a carpet of fallen leaves allowing only specialist, shade tolerant plants to survive.

Thus for species that are not obligate, we need to know which other tree species they might use instead. We already know that particular tree species are under threat, such as our ash trees from ash dieback and our oak trees from acute oak decline, chronic oak decline and oak processionary moth. In these areas we are starting assessing now how we can adapt our woodland management to enhance the biodiversity supported by these affected trees species.

These obligate species are most at risk from a decline in our ash and oak trees. However a large number of other species only use a limited number of alternative trees in addition to ash/oak and these species are also at risk if other suitable tree species are not nearby.

For all the ash and oak associated species, we assessed if they will or will not use a range of alternative tree species that might be planted or naturally colonize to replace ash/oak.  All the information about ash associated species is freely available in a downloadable database called AshEcol with one for oak due to be released soon.

We have shown how a mixture of tree species may be used to partially replace the functioning of a diseased species and support a large amount of the associated biodiversity.

Other studies from around the world show a similar pattern of impacts to that seen for ash and oak in the UK. Specialist species, those found on only one or a few tree species, are most at risk of declining.  Generalist species, and those species associated with dead wood, often increase following severe mortality of trees.

In our work on ash, we have shown how different this tree species is from most other deciduous tree species in the UK. For example, the leaves from ash trees are lost when they are still green. This makes their leave litter contain high levels of nutrients and decompose quicker. These soil factors influence which woodland flowers and grasses occur under ash trees. Replacement tree species are unlikely to have leave litters with comparable attributes.

Severe tree mortality over a large area can influence nutrient cycling and stream water chemistry at the wider scale. However, to date, such impacts have only been recorded in large forested areas, such as in the U.S.  Within Scotland, impacts of tree diseases on nutrient cycling are likely to be limited to changes at a smaller scale.

Many non-native tree species have been suggested as suitable replacements for some of Scotland’s tree species currently threatened by disease. However there is not enough detailed evidence on their ecological suitability to support these claims. To put it simply, we don’t currently know if they will support our native biodiversity or not.

What we do know is the importance of trees outside of woodlands for connecting woodlands. If these trees are lost because of disease or felled due health and safety concerns related to disease this may impact on the dispersal of species between woods.

This research has provided woodland managers with lists of the species associated with two of our native trees (ash and oak) currently at risk from disease (see AshEcol). Woodland managers aiming to conserve biodiversity can use our data to identify which species are most at risk and if ash or oak trees are in decline on their site.

Managers are also able to find out which alternative tree species will support those species at most at risk on their site.  We have developed a protocol for managers to carry out this assessment. We have used this protocol on 15 case studies in ash woodlands across the UK to suggest how management could be adapted to help mitigate the impacts of ash dieback on biodiversity. We are about to start carrying out a similar set of case studies for oak woodlands across the UK.

In summary assessments of the impact of tree diseases in the wider environment should include: