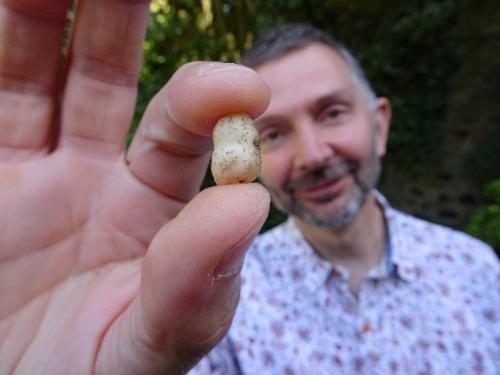 Since the emergence of late blight (Phytophthora infestans) in the 1840s this disease has presented a major challenge to the potato industry, with annual losses estimated to be £55 million in the UK.

Our aim was to engage people with the potential of wild potatoes to tackle this and other problems by acting as sources of useful genes. We also wanted to tell the story of how our collective research places Scotland at the forefront of the fight against late blight. A key part of that story is the pivotal role of a potato associated with the Royal Botanic Garden Edinburgh that was the first case of late blight-resistance genes entering the crop from a wild relative.

This project has involved a collaboration between the James Hutton Institute, the Royal Botanic Garden Edinburgh and SASA. The project was initially funded through SEFARI Gateway’s Responsive Opportunity Fund and really demonstrates how a small investment has led to continuing impact.

Although Scotland is a leader in potato research and the production of seed tubers, public recognition of this and the challenges faced by the industry is low. By using demonstration plots with interpretation panels and engaged ‘citizen scientist’ volunteers to tend the plants we aimed to raise public awareness around potato production.

A central part of the living display was the recreation of a hybrid potato associated with Edinburgh that has proven to be an important source of disease resistance. Genes arising from this cross are found in roughly 50% of potato cultivars today.

Late blight contributed to catastrophic famine in Ireland in the 1840s and soon after this first deadly emergence of disease people wondered whether wild potatoes might have a role to play in solving the problem. At the time there was no understanding of germ theory or inheritance and progress was initially slow.

Our citizen scientists recreated the Edinburgh potato (Solanum ×edinense) by controlled crossing of the cultivated potato with the wild species Solanum demissum found naturally in Mexico. How this blight-resistant hybrid potato originally appeared at the Royal Botanic Garden Edinburgh sometime in the second half of the 19th century is currently unclear. However, it could have arisen in cultivation as the two parent species will readily cross when grown together.

As breeding efforts gathered pace in the 20th century there was understandable interest in the Edinburgh potato given its proven resistance to late blight over many years. Nevertheless, the evolution of the pathogen means that new variants of resistance genes and entirely novel genes must continually be sought.

Evidence that the Edinburgh potato was successfully recreated come from detailed analysis of floral characteristics, particularly a comparison of the length of the pollen-bearing male reproductive structures called anthers. The artificially produced Edinburgh potatoes agree in all respects with previously published descriptions of this hybrid.

A key result in terms of public engagement is neatly summed up in this statement by the RBGE Community Engagement Manager: “I would say that the recent project has been one of the most popular and engaging we have ever had. It’s been very successful in terms of engaging the public with our science, horticulture and with the work of our research partners. It has been a brilliant way to talk about issues such as food security.”

The two citizen scientist volunteers have reported high levels of interest from the public whenever they are working on the plots. This reflects the value of working with plants that are familiar to people and have relevance to everyone as a globally important food crop. The volunteers have also been involved in writing up the results of the hybridization work for publication (currently in review with Sibbaldia, the Garden’s Horticultural Journal) as they carried out and documented all of the breeding work and subsequently germinated the resulting seeds.

The development of the project over two years has been documented through the RBGE blog and this has increased the public engagement potential of the project and gives a legacy of detailed information after the project comes to an end.

A major benefit of this project has been the way it has encouraged deeper collaboration between the institutes involved. The public demonstration and breeding work would not have been possible without the support and advice that was freely provided. Crucially, the living plant material necessary to bring the story to life as an engaging and attractive plant display relied upon sharing material in collections between the institutes.

Given the high degree of public interest we were optimistic that media interest in the role of wild potatoes in crop improvement could develop and we actively pursued this with our media contacts. This ultimately led to good media coverage on BBC radio and TV in Scotland with some uptake elsewhere in the UK in print. The highlights of this were items on the flagship BBC Scotland TV and radio shows Landward and Out of Doors presented by Ewan McIlwraith.

Overall, the experience has been a positive one in which professional scientists have engaged with science communication practitioners and volunteers interested in science to create a display of plants that tell a story about the valuable contribution of so-called Crop Wild Relatives in developing resilient crops that deliver food security now and in the future. Our findings have stimulated interest at the James Hutton Institute in testing newly created examples of the Edinburgh potato with the latest molecular genetic screening techniques to assess the genes involved in delivering disease resistance.