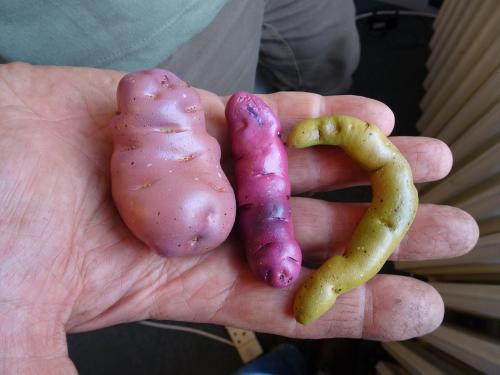 We are delighted that Max Coleman, Science Communicator, Royal Botanic Garden Edinburgh (RBGE), can tell us more about our much loved tatties. Max led a project team who were recently awarded SEFARI Gateway Responsive Opportunity Funds (ROF) to create new displays about protecting potatoes, which are now open to the public at RBGE. The ROF is designed to increase the visibility of the invaluable contributions Scottish Government funded research makes towards sustainable economic growth and improving the lives of people in Scotland and beyond.

Scotland is a global leader in the research and cultivation of one of our favourite foods, the potato. The Commonwealth Potato Collection (CPC), based at the James Hutton Institute in Invergowrie, contains around 1500 samples of wild potato species that collectively form a valuable genetic resource that helps to safeguard the future development of the potato. The CPC is the second largest collection of potato genetic resources in the world, after the International Potato Center (CIP) in Peru.

Globally, potatoes are the fourth most important crop after wheat, rice and maize. However, the history of the potato has been fraught with difficulties and in the 1840’s the emergence of a disease called late blight looked as if it would finish the potato as a viable crop. Successive crop failures in Europe from 1845 to 1849 had a devastating effect (e.g. the Irish Potato Famine).

Scotland was at the forefront of the fight against blight. Dundee farmer William Paterson started breeding and selecting to create new varieties that would be resistant to late blight and some of our modern varieties have a genetic link to the work of Paterson.

When late blight first struck we had no understanding of the science of genetics or germ theory and were not well equipped to cope with the problem. Today biotechnology is revolutionising how crop genetic resources can be used to help secure food production.

Work on the screening of wild potato species for genes that provide resistance to late blight is taking place at the James Hutton Institute. Searching for useful genes in wild potatoes is most effective when we have a good understanding of the biological diversity that exists. Putting it another way, an important foundation is knowing the species of wild potato that are actually out there. The Royal Botanic Garden Edinburgh is aiding the hunt for useful genes by exploring the diversity and evolution of plants in the potato family (Solanaceae).

Earlier this year I met geneticist Ingo Hein from the James Hutton Institute and botanist Tiina Sarkinen from the Royal Botanic Garden Edinburgh to find out more about the role of wild potatoes in protecting our familiar spud. I learned that as well as traditional methods of plant breeding, the advance of technology is now making it possible to utilise resistance genes in wild potatoes that could not be crossed with the domesticated potato.

In the future, farming will be able to benefit from the many useful qualities found in wild species in the drive for food security. However, this benefit will only be possible if we have conserved the wild species in the first place. This is where the Commonwealth Potato Collection (CPC) comes into its own as a gene bank. Seed is regenerated on a cycle and stored in ideal conditions to prolong its life.

To get an idea of the sheer diversity present in the CPC and a new appreciation for our humble potato, come to the Royal Botanic Garden this summer to see a selection of wild potatoes and traditional varieties from the Andes. There are free displays to see both outdoors in the Demonstration Garden and under glass just inside the Temperate Palm House.

I’ll also be attending Potatoes in Practice, the largest field-based potato event in the UK, at Balruddery Farm on Thursday 9th August, so do come talk to me if your there - I’ll be at the SEFARI stand. Potatoes in Practice is organised and hosted by the James Hutton Institute in partnership with AHDB Potatoes, SRUC (Scotland's Rural College) and Agrii. The event is also supported by media partner Potato Review.