Modelling the effect of social networks in reducing meat consumption 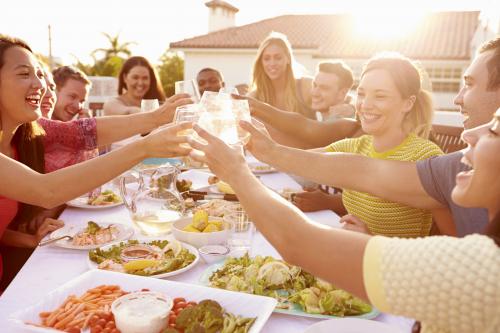 In this study, we built a computer simulation model to study the influence of social networks on behavioural responses to norm-based messages seeking to reduce meat consumption in the workplace. Messages were framed around concerns about health, the environment or animal welfare. The model illustrated how norm-based messaging about health can change individual behaviours (i.e. to eat less meat), which can spread through social networks and even effect those at home who are not directly exposed to the messages.

In the UK today diets are unsustainable. They are causing environmental damage (e.g. climate change, land use problems, water stress) and are contributing to the high prevalence of diet-related diseases (e.g. obesity, cardiovascular disease, cancer).

Numerous dietary changes can be made to achieve a healthy and sustainable diet, but what can be beneficial for both health and the environment is to eat less meat. The reason being that livestock production, especially ruminants, produce higher levels of greenhouse gas emissions, contributing to climate change, and higher consumption of red and processed meat is associated with an increased risk of some cancers.

Meat-based diets are the norm in the UK. This presents a challenge to reducing meat consumption. Many people are reluctant to eat less meat because they associate it with pleasure and some believe it would make very little difference to reducing environmental impacts. People tend to conform to the behaviours of others around them and what they perceive as the norm. One approach to reducing meat consumption, therefore, is to intervene to try and change the perception of norms within social networks using social marketing campaigns, e.g. norm-based messages.

The aim of this study was to model the influence of social networks on behavioural responses to norm-based messages to reduce meat consumption. We built a computer simulation model, replicating a ‘real’ world social system, that has dynamic interactions within and between social networks, to explore ways to encourage healthier and sustainable food choices (i.e.an agent-based model).

Agent-based modelling is an approach used to model complex dynamic systems simulating behaviours and interactions between agents (in this case, people), who can influence the behaviour of each other. In this study, agents were employees with two social networks; co-workers and household members. The behavioural response of the agents was whether to eat a meat-based meal or not. Each agent had initial concerns about meat consumption, relating to health, environment and animal welfare (based on data from the British Attitudes Survey). An agent’s behaviours could be influenced by norm-based messages in their workplace and the concerns of others in their networks. Three norm-based messages encouraging people to eat less meat were run in the model (relating to health, the environment or animal welfare). The model ran simulations over a three year period to replicate the dynamic nature of the system and the changing interactions within and between networks over time.

We found that only the health messaging reduced the simulated population’s average meat consumption, which is consistent with previous research, illustrating robustness of the model. It emerged that employees who responded positively to the health campaign (reducing their meat consumption) appeared to also influence the food choices of others in their household. This demonstrated a positive spillover effect from the workplace to home via social networks.

However, the simulation revealed an unintended consequence when people with high concerns for the environment were targeted. The undesirable effect of increasing meat consumption occurred, which was a consequence of these agents shifting towards the behaviours (‘the norm’) of those in their network who had lower concerns around meat consumption.

The global problems of climate change and diet-related ill-health are explicitly linked through poor diets. This calls for a population shift to healthy and sustainable diets, which should include eating less meat. While this is recognised, less is known about how to achieve this dietary change. Social networks and environments play an important role in people’s food choices and therefore could be used to instigate change by creating new norms around healthy and sustainable diets.

However, social networks and interactions are complex, not least as people have multiple networks in their lives, which makes them difficult to study using traditional research methods. Computer simulation models provide a method to study them and observe behaviours in a large heterogeneous population (e.g. simulate ‘real’ world scenarios). This is particularly relevant for studying food-related behaviours that differ among the population.

Computer simulations, such as the one used in this case study, provide an opportunity to test behavioural response and adaptations over time by introducing changes or interventions, such as new policies, in an artificial environment. This approach is a cost-effective method to explore and understand emergent behaviours and identify unintended consequences during the development of policies and prior to implementation.

Finding ways to change our diets is critically important in helping to meet the climate change emission reduction targets, as well as to improve our health and this research demonstrates a method investigating the role of social networks and interactions that could assist dietary change.