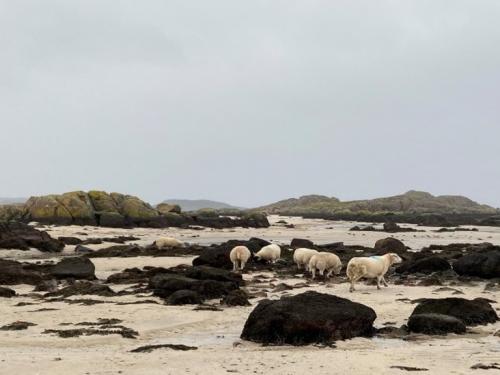 A SEFARI Gateway-funded Specialist Advisory Group brought together a broad range of expertise across key industry stakeholders, Government Policy Leads and relevant SEFARI researchers to discuss livestock health and greenhouse gas emissions (GHG), to prioritise health conditions that have the greatest impact on emissions and to identify practical disease intervention strategies and pathways to impact that will encourage uptake across the industry.

An efficient, sustainable, and profitable livestock sector is important for Scotland, and globally, both from an economic and environmental standpoint. That said, livestock are seen as a major contributor to global environmental problems through GHGs, associated pollution, and biodiversity loss. Animal agriculture does produce (and help sequester) GHG emissions, but is under considerable political pressure, along with other sectors of the economy, to reduce emissions as we work towards Net Zero by 2045.

All these groups identified livestock health as one of the most cost-effective GHG mitigation options, and some even included priority disease lists. To build on this previous work, a Special Advisory Group was created - comprising researchers from across SEFARI and key industry stakeholders and Scottish Government Policy Leads – to identify practical health interventions that would help farmers identify where emissions reductions could be made and encourage uptake across the industry.

The Specialist Advisory Group held two  virtual workshops, in November 2020 and 2021 respectively. Through these workshops and intervening discussions, the Group gained a better understanding of the practical issues involved in reducing emissions from livestock, and heard the perspectives and priorities of other stakeholder groups represented. There was broad agreement that improving livestock health is a cost-effective, immediate, and practical way for livestock producers to enhance the production efficiency of their animals and to reduce total on-farm GHG emissions. Improving animal health is also a platform to allow optimal expression of other GHG mitigation measures e.g. ‘breeding and feeding’, novel feed additives etc. However, there is a need to be mindful of unintended consequences e.g. drive for reduced days to slaughter (rare breeds, hill & upland systems), and improved reproductive performance leading to higher numbers of animals on the ground equals higher emissions totals.

The project team has developed a framework for action prioritising the most cost-effective interventions to mitigate diseases and GHG emissions at herd or flock level with clear priorities and goals. The framework stresses the importance of disease and syndrome approach and is centred around three primary target areas: feed conversion efficiency, optimising growth rates and the reduction of involuntary culling of breeding stock. The discussions have contributed to the ‘Acting on methane: opportunities for the UK cattle and sheep sectors’ report, produced by Moredun Research Institute and Ruminant Health and Welfare Group. This new approach provides an important level of confidence for livestock producers and has led to new research opportunities identified within SEFARI and beyond, especially around the use of data (e.g. animal movements, medicines records, Key Performance Indicators etc.) and appropriate metrics to measure and incentivise behaviour change.