Barbervax®: giving blood-sucking parasitic worms a taste of their own medicine 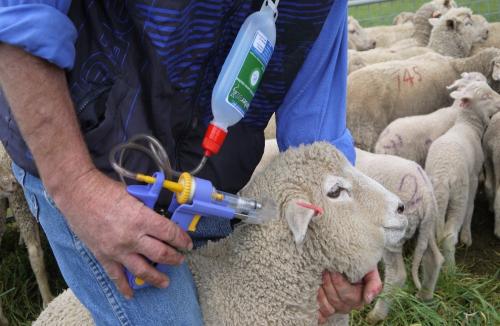 This case study is part of a series focusing on the importance of sustained funding for fundamental and strategic research. The first in this series summarises the research behind Barbervax®: a vaccine for the Barber’s Pole Worm, Haemonchus contortus. Barbervax® is the first vaccine in the world for a worm parasite of sheep and for a gut-dwelling worm of any host, including man. Vaccines, especially against parasites, are notoriously difficult to develop and Barbervax® is the result of many years of research by a team at the Moredun Research Institute in collaboration with scientists in Australia, where Haemonchus is a real problem. The vaccine gives the blood-sucking Barber’s Pole Worm a taste of its own medicine by stimulating antibodies that circulate in the host’s bloodstream so that the parasites drink antibodies specific for their own intestinal proteins. Barbervax® is an excellent example of the global influence and impact of Scottish Government-funded research and international collaboration.

Almost all grazing ruminants become infected with nematode, or roundworm parasites, which live in their gut. All species damage the lining of the gastrointestinal tract to some extent, destroying the cells which produce the hosts’ digestive enzymes, leading to inappetence, poor digestion and reduced growth rates. This loss of livestock production caused by roundworms results in reduced biological efficiency and significant economic losses for farmers. In the UK, the annual cost of sheep nematode infections was estimated to be in the order of £84 million, but that was approximately 15 years ago. A more recent comprehensive study, funded by the EU- GLOWORM project, suggested total annual losses due to gastrointestinal nematodes in the European dairy cattle and the meat sheep industry as €902 and €372 million, respectively.

Haemonchus contortus, commonly known as the Barber’s Pole Worm, is the most dangerous blood-sucking roundworm parasite of sheep and goats globally, frequently causing fatal anaemia. A moderate infection of a few thousand adult worms, can drink the equivalent of a standard can of soft drink (330ml) of blood per day. The female parasite’s uterus is twisted around its blood-filled intestine, creating a red and white spiral, hence its name 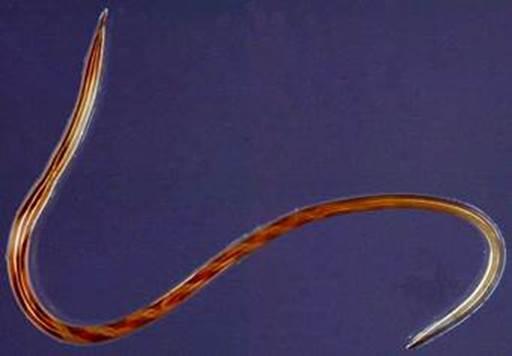 The name Barber's Pole Worm refers to the female parasite’s uterus being twisted around its blood-filled intestine, creating a red and white spiral.

Haemonchus prefers warm humid climates. It is particularly problematic in parts of Australia, S. America, Asia and South Africa, although fatalities in the South of England are not uncommon.

Like all sheep gut worms, Haemonchus is usually controlled by routine treatment with chemicals, called anthelmintics. Unfortunately, the worms on many farms have become resistant to these chemicals, rendering them only partially effective or useless. This is a particular problem with Haemonchus, because it is so pathogenic (i.e. damaging), farmers are more inclined to treat against it and thus perpetuate selection for resistance.

The dream of being able to vaccinate sheep and cattle to prevent infection with parasitic worms is by no means new. However, despite lots of research in many countries, prior to the launch of Barbervax® the only worm vaccine on the market was for a bovine lungworm, developed approximately 60 years at the University of Glasgow Veterinary School, so another Scottish success story!

Barbervax® was developed after many years of research at the Moredun Research Institute in Edinburgh, with much of this work supported by the Scottish Government. Back in the early 1990s, the project team identified a detergent-soluble extract of Haemonchus intestinal cells that provided solid and consistent protection when used to immunise sheep.

Detailed protein chemistry and molecular biology analyses allowed the team to identify most/all the components (or antigens) within the protective fraction, which turned out to be a complex of the parasite gut’s digestive enzymes that it uses to digest its blood meal.

A high power electron microscope image of the various enzymes which form a unique complex on the surface of the worm’s intestine. This complex, which is a highly protective component of Barbervax, contains a cavity in which it is believed digestion takes place. A red haemoglobin molecule at the same scale is shown in the cavity.

This also set up the possibility of producing the prototype vaccine artificially i.e. using recombinant expression, a process to manipulate antigens for industrial applications. Several approaches were tried e.g. bacteria, yeast, insect cells, even free-living nematodes and, while it was possible to produce most of the major antigens in this way, none of these systems replicated the protection afforded by the original (or native) protein fraction, either on their own or in combination.

To be able to produce a native vaccine economically, the dose of antigen needed to be small. Amazingly, trials showed that only 5 millionths of a gram per injection was sufficient for protection, about 50 times less than initially thought. To produce the vaccine on a commercial scale (i.e. millions of doses per year) required a method for obtaining kilograms of worms cost effectively. An award winning bespoke nematode extraction system (Nemesys®) was designed in collaboration with engineers based at 4c Design Ltd in Glasgow and is now part of the vaccine production line in Australia. 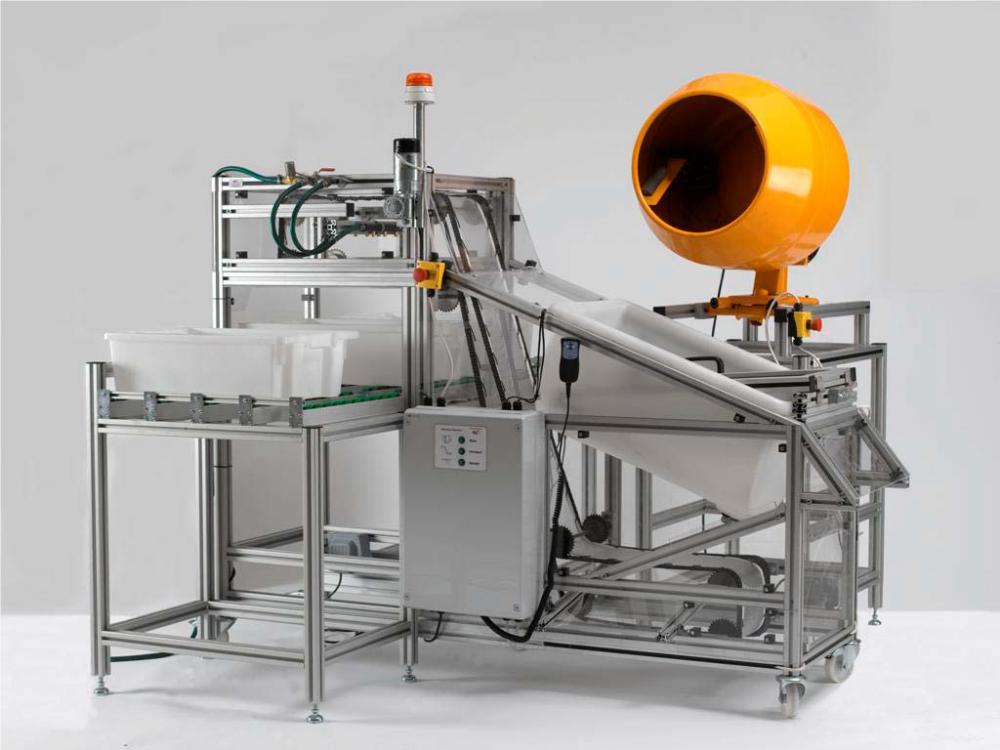 The vaccine was commercialized through a collaboration with the Department of Primary Industries and Rural Development (DPIRD), Western Australia, funded by Meat and Livestock, Australia. Barbervax® is manufactured at the DPIRD’s Albany Laboratory on the South coast of Western Australia, where it is made by Wormvax, a wholly-owned subsidiary of Moredun.

Barbervax® significantly reduces Barber’s Pole disease by reducing worm egg output, and pasture contamination. From an individual producer’s perspective, vaccination is relatively straightforward, as it involves one product and the same dose for all sheep, irrespective of size. In addition, vaccination is seen as a ‘greener’ alternative to drugs as there is no meat or milk witholding period.

The vaccine works against all Barber's Pole worms, including different species of Haemonchus which infect cattle and also against drench resistant strains. It offers a more sustainable form of control because it is extremely unlikely that vaccine resistant worms will develop. Vaccination prevents rather than cures infection and so, in this case, reduces the need to use the anthelmintic drugs that are still effective on farms, therefore, helping to prolong their active life.

Millions of doses of Barbervax® have been sold in Australia since it was launched 5 years ago, particularly in Northern New South Wales, where it rains mainly in summer and where Haemonchus thrives. In South Africa, Haemonchus is known as Wireworm and so Barbervax® is called Wirevax® over there. It is also proving locally popular with sales growing steadily since its South African launch in 2017

Although manufacturing is based in Australia, the net profits flow back to Scotland, where they are used to support further research.

Permission to sell Barbervax® through veterinary practices in the UK was obtained from the Veterinary Medicines Directorate in 2018. It will be interesting to see how it performs under UK conditions this summer. Meanwhile attempts to get Barbervax® onto further international markets continue.

Barbervax could not have been commercialised without the help of George Newlands, Richard Mole and Julie Fitzpatrick at Moredun, Robin Smith and his fellow engineers at 4c Design Ltd, Glasgow, Brown Besier, Jill Lyon and Darren Michael at the Albany Laboratory of the Department of Primary Industry and Rural Development, Western Australia and funding from Meat and Livestock, Australia.

The work summarised here is part of a much larger ongoing programme of research on sustainable parasite control within the Scottish Government-funded Strategic Research Programme. SEFARI researchers are using what they have learned during the development of Barbervax® and applying it to a potential vaccine for Teladorsagia circumcincta, another significant gut worm parasite in Scotland, and also to liver fluke, which is also a blood-feeder, like Haemonchus. Patents have been filed for the T. circumcincta vaccine, although its likely deployment may be a few years away. In addition, the development and implementation of cost-effective disease control strategies offer opportunities for breaking the cycle between climate change and parasitism, and helping to reduce GHG emissions from animal agriculture.