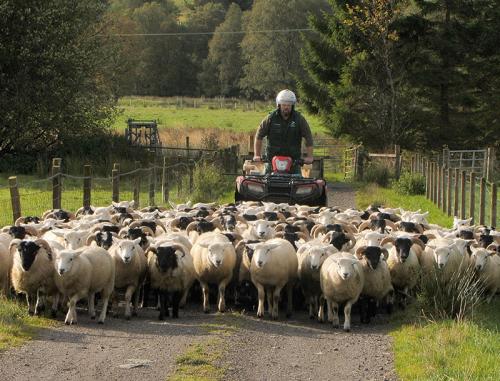 This case study will summarise ongoing research on Teladorsagia circumcincta, one of the most common and economically important endemic parasites to control in sheep in the UK. SEFARI scientists have found that as temperatures gradually get warmer there could be a ‘tipping point’ where parasite burdens suddenly get a lot higher. Our scientists have also shown that climate change can increase parasite burdens, these parasite burdens can substantially drive-up greenhouse gas emissions, and ineffective parasite control can lead to further increases in emissions. The positive is that parasitic gastroenteritis is one of the most cost-effective and feasible diseases to control in Scottish sheep. One tool for parasite control is vaccination. Our scientists have developed Barbervax®, the first registered subunit vaccine to protect sheep against gut parasite infection.

Endemic diseases are a major constraint on sustainable and efficient livestock production in the UK. These diseases can be caused by viruses, bacteria or parasites, and limit the development of livestock by impacting upon their biological efficiency and productivity. Gastrointestinal nematodes (roundworms) are physically and economically damaging parasites that affect sheep and cattle (ruminants) across the globe. A conservative estimate of the cost of parasitic gastroenteritis (caused by gastrointestinal nematodes) in lambs to the British sheep industry was £84 million in 2005.

These parasites have two distinct aspects to their lifecycle – inside the host, and outside in the environment. Outside the host, they are exposed to ambient climatic conditions (temperature, humidity etc.), and these conditions affect their survival and development. So changes in climate will drive a change in timing, intensity, and distribution of parasite outbreaks.

Inside the hosts, these parasites affect methane emissions of livestock by influencing feed efficiency, nutrient use and production traits. Overall, livestock contributes 15% of man-made greenhouse gas (GHG) emissions globally. Of this, the majority (40%) can be attributed to enteric fermentation, a process which occurs naturally within the stomach of ruminants, where microbes break down food to produce methane, which is expelled through burping (or eructation). So it is vital that we understand the two-way interactions between parasitism, production efficiency, and climate change.

This case study will summarise ongoing research on Teladorsagia circumcincta, one of the most common and economically important parasites to control in sheep in cooler, temperate regions like Scotland.

For the free-living stages (outside the host) of Teladorsagia circumcincta, SEFARI scientists have quantified the effects of temperature on egg hatching and development using climate-controlled incubators. They found that as temperatures increase, the parasites develop faster.

The next step was to understand how these temperature-driven changes in parasite development affect the worm burden in the host. To do this, they developed a mathematical model of parasite transmission. This model encapsulates the key processes of parasite infection, both inside the host and on the pasture.

The model revealed that as temperatures rise the number of adult parasites within the livestock host will increase. The predicted increase is non-linear, so as temperatures gradually get warmer there could be a ‘tipping point’ where parasite burdens suddenly get a lot higher. This rise is due to the larvae developing faster, leading to multiple generations on pasture over one season. Small changes in temperature could, therefore, lead to more abrupt and high-intensity outbreaks.

Climate-driven changes in parasite burdens will alter the efficiency of livestock systems and influence the rate of GHGs produced. Infected livestock are less efficient, grow more slowly, and are in the production system for longer.  A five-year field trial has revealed that ineffective gastrointestinal parasite control can result in a 10% increase in GHG emissions intensity compared to control groups, due to changes in growth rates and time taken to reach target weights.

Worryingly, the influence of parasitism on methane production has been shown to go beyond changes in production efficiency and growth rates.  For every kg of feed ingested, SEFARI scientists have found that parasitised lambs produce 33% more methane than unparasitised lambs.  As parasitised livestock are less efficient and need to eat more feed to reach target weights, such diseases can lead to a substantial increase in GHG emissions.

As climate change increases parasite burdens, these parasite burdens can drive GHG production. A rapid evidence assessment has identified parasitic gastroenteritis (caused by gastrointestinal nematodes) as one of the most cost-effective and feasible diseases to control in Scottish sheep. Sustainable control could represent a win-win situation, where there are wins from an economic and environmental standpoint.

One tool for parasite control is vaccination. Developed by SEFARI scientists, the Barbervax® vaccine is the first registered subunit vaccine to protect sheep against gut parasite infection. SEFARI researchers have been able to learn from the development of Barbervax® and apply what they have learned to a potential vaccine for Teladorsagia circumcincta. Patents have been filed for this vaccine, although its likely deployment may be a few years away.

The long-term parasite forecast for the UK is looking gloomy under climate change.  However, the development and implementation of cost-effective disease control strategies offer opportunities for breaking the cycle between climate change and parasitism, and GHG emissions.