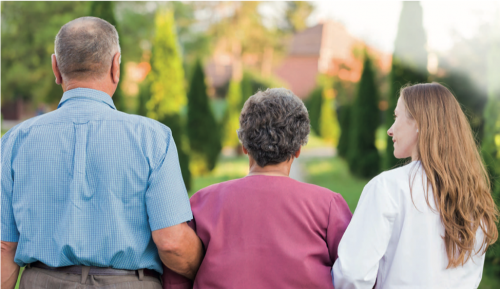 The research discussed in this blog is part of a programme of work to assess the role of dietary components in a healthy diet for an ageing population, particularly effects on mental and intestinal health.

The role of the gut in influencing the brain is an evolving field and this team of clinicians and nutrition scientists conducted a small human study to examine the role of gut bacteria (by focusing on the microbial profile) in people with Alzheimer's disease who exhibit behaviours that challenge us.

This work has the potential to aid the specific needs of an ageing population by better tailoring the clinical-care pathway and creating new opportunities for life-science companies and industrial markets to develop healthy foods/diets that can help.

Gut health has long been linked with disease. It was over 2,000 years ago when the Greek physician Hippocrates, oft-lauded as the father of modern medicine, is purported to have made the proclamation, which is still influencing current day researchers and practitioners in medicine:

“All disease begins in the gut”

There are many factors that have a modulating effect on the brain and on the gut microbiota, including socioeconomic status, diet, congenital factors, environmental factors, exercise and activity levels, medications such as antibiotics, and mode of delivery at birth.

The term ‘gut microbiota’ describes the composite microbial community found in the mammalian gastrointestinal tract consisting of bacteria, archaea (single-celled organisms similar to bacteria), fungi and viruses. The hundred trillion bacteria in the body of an adult human contain about 4 million distinct bacterial genes, with more than 95% of them located in the large intestine!

Increased life expectancy and an ageing UK population, with a greater proportion of adults over the age of 65 years, mean that we need to find effective measures to cope with the increased need for the better diagnosis and management of neurological and neurodegenerative disorders associated with ageing. In the last decade, the gut microbiota in particular has been associated not only with brain development and function, but also with the pathophysiology of brain ageing and neurodegenerative disorders such as Alzheimer’s disease, Parkinson’s disease and depression. Neurodegenerative diseases are conditions which result in the destruction or death of nerve cells in the brain. This causes dementia, and with an ageing population many of these conditions are increasing in prevalence. Currently there is no cure for neurodegenerative conditions and treatments are aimed at controlling symptoms and slowing progression. For Alzheimer’s disease, there is a need for treatment of behavioural and psychological symptoms of dementia (BPSD), as these symptoms are challenging not only for the patient, but also for carers and family. Common examples of BPSD are apathy, aggression, agitation, wandering and insomnia.

The gut-brain axis is of interest because recent research has provided strong evidence for the role of the commensal gut microbiota in brain function and behaviour. This axis is how our brain, our gut, and our gut microbiota (the community of gut microbes living in our intestine) interact and communicate with each other. This connection allows bi-directional communication, which means your gut talks to your brain and your brain talks to your gut. This all happens through their own biochemical signalling– messages sent via hormones, nerves and other signalling molecules. Many potential pathways are involved in this bidirectional communication between the gut (microbiota) and the brain such as immune mechanisms, the vagus nerve and microbial neurometabolite production.

Food intake, or diet, has repeatedly been shown to be one of the most important factors affecting gut microbiota establishment, composition and activity throughout the lifespan. The good news is that more than 50% of the variation in the gut microbiota has been related to dietary changes and major changes in diet during adulthood can modify the microbiota in a matter of days! Thus the concept of the gut-brain axis can really be considered as the “food-gut-brain” axis, with the gut microbiota having a key role in degrading the dietary products (food), releasing metabolites into the gut that contribute to the signals then sent to the brain.

The Ageing Gut-Brain (GB) study is a proof of concept study aiming to determine any differences in the gut microbiota between three cohorts of age-matched adults living in a care home environment.

The concept that inspires Ageing-GB is that our gut microbiota impact upon the gut-brain axis and thereby on behaviour. We need to understand the nature of that impact, the underlying mechanisms, and how changes in diet can reprogram our gut microbiota-brain axis to resolve or reduce clinical symptoms associated with dementia.

This was a pilot study to examine whether the composition and/or diversity of the gut microbiota is different between healthy elderly individuals and those with dementia, who do or do not exhibit behaviour(s) that are challenging.

The collection of faecal samples from these individuals allowed us to examine the differences in faecal microbiota composition and activity between groups consuming similar foods.

These studies are observational and not intended to define correlation or causation. The translational value of therapeutics focussed on the interaction between diet-microbiota and the gut-brain axis for AD patients remains an open question. This blog will be updated with results in 2021. For now, our interim data suggests that the biomarkers of gut microbiota diversity is lower in subjects resident in the care home than that measured in free living adults, within the home environment. Diet and ageing may be factors contributing to these trends, as well as medication and medical complications. We believe that our work is fundamental to provide evidence to support dietary modification / supplementation as a cost-effective and a safe avenue for alleviating signs and symptoms of dementia in this vulnerable group and reduce the carer burden. There is a need, therefore, to understand the underlying mechanisms which could potentially link our diet to gut microbiome and thus how changes in diet might re-programme our gut microbiota-brain axis to resolve or reduce behavioural and psychological symptoms in dementia.

Acknowledgements: This research was funded by Scottish Government through the Strategic Research Programme to the Rowett Institute, with assistance from TENOVUS and NHS-Endowments.