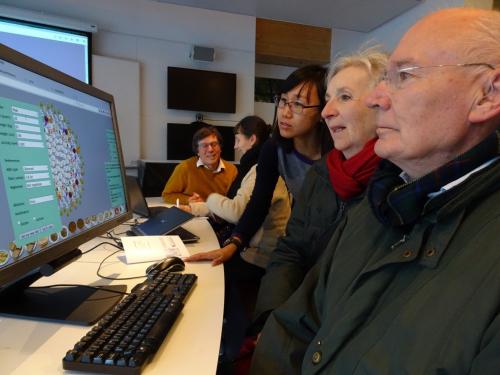 Despite national dietary guidelines, our typical diet still contains too many calories, saturated fat, salt and sugar, whilst having insufficient amounts of fibre, fruits, vegetables and fish. Advice for healthier diets proliferates, but many people may not know how to make sense of all these messages, how reliable they are and how to use them in a retail environment where food producers use sophisticated marketing strategies to promote specific (and often unhealthy) products.

In recent years, sustainable diets are increasingly being promoted as a way to reduce the impact of human activities on the planet as well as to improve population health. Food consumption is responsible for up to 30% of the environmental impact of household consumption, and recently sustainability has been added to dietary goals in several countries (albeit not in the UK yet).

The ‘Green Grocery List’ tool takes diet records from a national database and uses the records as examples that help users to experiment with food swapping options. The mathematics behind the tool ensures that dietary recommendations are all met, with the minimum amount of change needed to achieve this. Users are offered suggested changes to particular food items which they can choose to accept or reject. If accepted, the next suggested change is offered, and if rejected the optimisation runs again (behind the interface), with these steps continuing until a diet satisfying all requirements is achieved. As well as nutritional targets, users can specify limits on the change in greenhouse gas emissions associated with the diet or constrain changes in the cost of the diet.

We have run the food swapping algorithm on a large nationally representative database of diet records to see what sort of food changes are selected. This has given us an insight into the sort of changes that would be most beneficial for a typical Scottish/UK diet. These changes support research findings e.g. fewer sugary products, more fruit and veg and with fibre, sugar and sodium targets being the biggest drivers for change.

There are many ‘food swap’ websites and apps, but none of these are underpinned by robust nutrition science or mathematical methods or underwritten by policy bodies. Furthermore, none of these food swap tools consider personal interests in the carbon footprint of foods, or indeed affordability.

This new innovative tool looks very promising and effective but will need further validation and optimisation for use by consumers in order to make it fully operational and consumer friendly. We are hoping to continue this development with SEFARI Gateway’s support and have already made contact with interested groups at Scotland Food & Drink and the NHS to discuss further opportunities for making the tool more widely available.