Cowtastrophy: Tested in the Field!

Cowtastrophy: Tested in the Field! 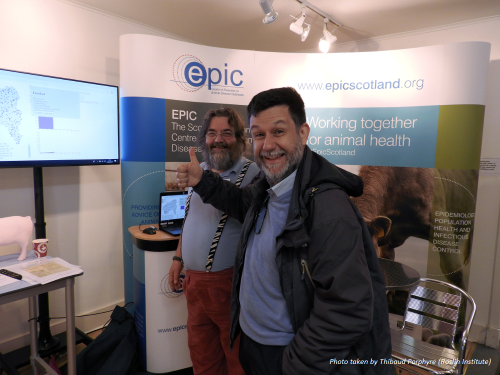 In a previous blog article we described the development of the Cowtastrophy web app which was funded by the SEFARI Gateway’s Responsive Opportunity Fund. The main aim of the app is to communicate some of the key concepts which drive livestock disease control policies to a non-scientific audience. In particular, we see the app as a tool to support knowledge exchange at public events.

The Cowtastrophy web app was developed with helpful input from EPIC (the Scottish Government-funded Centre of Expertise in Animal Disease Outbreaks) and we were delighted to be able to present Cowtastrophy as part of EPIC activities at the Royal Highland Show in June this year.  We were able to talk to plenty of visitors and use the app as part of an informal, but structured process to support learning.

The basic scenario of the Cowtastrophy app is that the participant is the Chief Veterinary Officer on an imaginary island.  A fast spreading disease is affecting cattle on the island.  It is their job to control the disease using a combination of the available options, which are: livestock movement restrictions, vaccination and culling.

At the Royal Highland Show we knew we could expect a highly varied audience: school-age children, farmers, policymakers and members of the general public. Our challenge was to help visitors to understand the impact of their decisions on the spread of disease and we decided to do this by developing an app guide (what we call narratives) that would appeal to a diverse array of people.

We believe that the app is most effective if it is demonstrated in person at an event, with the narratives encouraging and supporting users to navigate through the app’s virtual world depicted in ways which lead to specific learning outcomes. Essentially, the narratives are the basis for an informative conversation between the demonstrator and the audience. The narratives we developed were fairly simple and accessible, but with plenty of scope for extension depending on the interests and enthusiasm of the audience.

Initially, the participant is encouraged to look at what happens without any control measures. Typically, all farms on the island become infected, leading to an expensive outbreak.  Most participants understood that a fundamental control approach will be to cull animals on farms with confirmed cases, rather than leaving them alive to spread disease and incur high ongoing costs.  This policy typically leads to some reduction in infection levels, but a very large number of farms do still become infected: not a great outcome.

Participants are introduced to the concepts of movement restriction and vaccination, and, depending on preference, they can choose to try to implement one of these control measures in addition to culling.  If they seek to stop livestock movements between farms, they can apply restrictions either across the whole island or just close to confirmed cases. Whole island restrictions are the most effective, but even local restrictions can appreciably help to reduce further disease spread.  If they implement vaccination, this will be applied in circular zones around confirmed and, optionally, suspected farms. The latter will be found to be much more effective.

In general, the more quickly controls are implemented, the better the outcome.  This finding can then be the basis of some discussion as to the relative practicality of the rapid introduction of movement restrictions versus a rapid implementation of a vaccination strategy.

During the Royal Highland Show, we talked to a wide variety of people and it was an interesting experience for all involved.  Children as young as seven years old interacted with the app, which also promoted useful discussions with accompanying adults.  Some people were able to draw their own conclusions from trying out various interventions, while others needed a bit more support.

We interacted with people from both rural and urban backgrounds; the former probably were better able to gain a clear understanding of the issues involved, but the discussions whilst using the app suggested that most participants acquired a better perspective on the practicalities of disease control policy.  Some members of the public spent a long time playing with the app and were clearly fascinated by it.

A number of policymakers also expressed enthusiasm for the app, including Jesus Gallego (Deputy CVO Scotland), pictured giving our app the thumbs up.

Overall the feedback we received about Cowtastrophy was extremely positive although one farmer did comment that he’d experienced disease ‘on the ground’ more than once and (understandably) had no desire to see the spread of a ‘virtual’ disease.  Even so we were able to have a conversation with every visitor to raise awareness of the issues surrounding disease control and the Cowtastrophy app proved an effective route for initiating discussions on this potentially difficult topic.

We would like to thank EPIC for providing us with such an excellent platform to present Cowtastrophy to the general public; and SAOS (the Scottish Agricultural Organisation Society) for hosting both EPIC and ourselves at the Royal Highland Show.