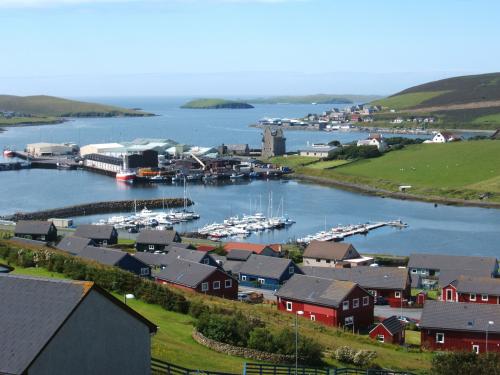 This case study summarises ongoing work exploring how changes in the population of remote and rural areas in Scotland affect the social, economic and ecological resilience of these areas. The Sparsely Populated Areas (SPA) of Scotland have a demographic legacy which, in the absence of intervention, will result in decades of population decline, and shrinkage of its working-age population, on a scale which implies serious challenges for economic development, and consequences for its landscape and ecology which are poorly understood. The SPA does not equal rural Scotland – demographic projections for the rest of rural and small-town Scotland are relatively positive. This work is also featured in a blog post which can be found here.

In August 1930 the 36 remaining inhabitants of the island of St Kilda were evacuated to the Scottish mainland. This followed a period in which the population dwindled due to outmigration, outbreaks of disease, food shortages, and the increasing difficulties in providing the level of services expected in the twentieth century. Arguably (except for the food shortages and disease) communities in some parts of remote rural Scotland are facing similar challenges today. Since 1930, St Kilda has become a cherished and strongly protected natural heritage asset.​

Back in 1965 Willie Ross, Secretary of State for Scotland made a speech in the Commons announcing the establishment of the Highlands and Islands Development Board (HIDB), in which he referred to the Highlander as “the man on Scotland’s conscience” and the region as having had “a shabby deal by history”.

To a great extent, the “Highland Problem” was synonymous with its long history of population decline. However, according to the popular narrative, by the time the 1971 Census was taken, the tide had turned. Each successive Census since then has shown the Highlands and Islands population change in positive territory.

This optimistic story seems to chime with the gradual improvement of the GDP per capita figure for the region, which eventually led to the downgrading of the region’s eligibility for EU Structural Fund support. The sense that the region’s problems were largely solved perhaps accounts for the gradual shift in the role and status of the successor to the HIDB, Highlands and Islands Enterprise (HIE), which is now charged with delivery of “mainstream” innovation and growth policy, within the context of the National Performance Framework and Scotland’s Economic Strategy. The Highlands and Islands are in many respects no longer seen as “a place apart”, deserving special assistance.

Without wishing to downplay this positive story, it is nonetheless fair to say that it has been to a large extent driven by growth around Inverness, along the Inner Moray Firth, and around towns such as Kirkwall and Lerwick. HIE’s continued designation of “fragile areas” is testament that the outlook is not so rosy elsewhere in the region. It is well known that the more remote and sparsely populated areas have less positive demographic trends. So, there is a sense in which the Highlands and Islands success story is a function of where the boundary is drawn. A tighter focus upon sparsely populated areas results in a very different picture.

The starting point for this research was, therefore, to define more precisely the territory which is commonly referred to as “remote” or “sparsely populated”. Using a Geographic Information System analysis, it was possible to identify areas from which less than 10,000 people (the minimum size of an urban area according to the Scottish Government’s classification) can be reached within 30 minutes travel using roads and ferries. We found that the SPA extends to almost half of the area of Scotland, but contains less than 3% of its population.

We found that the total population of the SPA was in decline during the 1990s, but saw a brief period of expansion during the first decade of the new century. By 2007 or 2008, this increase was reversed and the falling trend is projected to continue through to the 2040s. This rather negative prognosis for the SPA contrasts with the more positive future which is foreseen for the rest of Scotland, both rural and urban.

This divergence in the demographic development of the SPA, compared to the rest of Scotland, is associated with an age structure which is both a legacy of past out-migration and forms a key driver of the future trend. The key demographic issue for the SPA is not an excess of elderly people, but the relatively small number of children and young people, which in the years to come will translate into a shrinking working age population. This will have serious implications for the workforce, the economy, and the capacity for demographic regeneration. The relatively low levels in the childbearing age group seem likely to lead to a spiral of decline unless counterbalanced by substantial net in-migration.

These changes in age structure have profound significance both for future demographic sustainability and for the balance between local council revenue and the demand for services. By 2011, for every 100 persons of working age in the SPA, there were 64 people in the dependent age ranges (under 16, and age 65 and over). This compares with a lower figure of 58 people in rural areas and small towns outside the SPA and just 49 people in urban areas.

The key demographic issue for the SPA is not an excess of elderly people, but the relatively small number of children and young people, which in the years to come will translate into a shrinking working age population.

Using a projection model specially adapted for smaller populations, it has been possible to estimate the likely future population trends for the SPA and each of its constituent sub-regions. Of course, these assumptions may readily be challenged, and they will be the subject of continued research. The projections presented here represent a baseline, a continuation of the status quo.

According to these initial projections, the SPA will lose more than a quarter of its population by 2046. A look at the projections for the three broad age groups reveals the disturbing fact that it is the working age population which seems likely to shrink most.

The populations of children and older people are forecast to fall by less than 20%. As a result, the SPA’s dependency ratio will increase. By 2046, each 100 people of working age will be supporting 74 persons. One of the interesting features of the model used to produce the above projections is its ability to estimate the net migration that would be required to stabilise the population.

All these considerations point to the need for a careful and balanced foresight exercise to review possible scenarios for the future of the SPA. We intend to carry out such an exercise over the next two years. It is important not to “over-interpret” the above findings, and to keep them in context. This suggests that the following should be kept in mind: