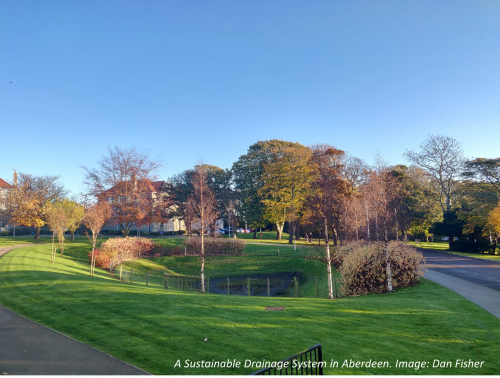 Although there are many definitions of Green Infrastructure, at its core the term refers to connected green spaces that are strategically designed and managed to provide multiple functions and human benefits (See Figure 2 from the ESPON GRETA project). Despite these positive aims to boost sustainable development of both urban and rural spaces, examples of high-quality Green Infrastructure in the UK are still the exception rather than the norm, although some positive case studies do exist.

Figure 2. Illustrative example of potential components of Green Infrastructure and related benefits across spatial scales. Icons illustrate services provided, while the boxes present a selection of green infrastructure elements (Credit: ©ESPON, Origin of information: ESPON EGTC. The interpretation of ESPON material does not necessarily reflect the opinion of the ESPON 2020 Monitoring Committee)

International high-profile examples of Green Infrastructure, such as New York’s High Line project, have been lauded for providing socio-economic benefits and critiqued for negatively impacting on people’s sense of place and their role in gentrifying nearby areas. Therefore, our project sought to explore the means through which Green Infrastructure can provide multiple social and environmental benefits, whilst also trying to ensure that such benefits are experienced in a socially inclusive manner.

Using the UK as a case study, our research was directed by three main questions:

(1) Can a set of guiding social principles be adopted for Green Infrastructure?

(2) Where principles are already being applied, what challenges do practitioners face?

(3) Do the principles and their challenges vary across project stages?

To answer these questions, we conducted in-depth interviews with professionals whose work explicitly involves Green Infrastructure (interviewees included developers, landscape consultants and local authority employees). Participants were also given a short survey to complete which focused on the principles and the challenges of implementing these at each stage of a project life cycle. The interviews were then based around participants’ survey responses. In total sixteen participants undertook both the interview and the survey, with the data collection period lasting between January and March 2020.

In general, participants agreed with the social principles being suggested, with strongest agreement expressed for the principles which focus on equal access rights, inclusivity, community resilience and availability of funds throughout the project cycle. There was a greater diversity of opinion regarding principles designed to incorporate the views of stakeholders into designs and ensuring that existing land use and cultural contexts are maintained. Participants felt that, although Green Infrastructure should be in keeping with existing land use, the application of this principle should be context-dependent and not preclude the implementation of Green Infrastructure, especially where such land use inhibits rewilding opportunities.

When participants were asked the extent to which they felt they could apply the suggested principles in their recent work, responses were more varied. Participants employed in the public sector were, generally, more negative about the potential application of the principles, whereas those in the private sector reported more positive experiences. During the interviews, participants also expanded upon their experiences, frequently mentioning that the principles could be applied more effectively. Participants employed in the public sector were particularly concerned by the need to organise and finance the monitoring and maintenance of Green Infrastructure, and this issue emerged as being central to ensuring the sustainability of the Green Infrastructure. The main challenge was that the responsibility for maintaining Green Infrastructure is often the responsibility of multiple actors, or no-one actor explicitly.

Participants were also asked at which stage of a project each principle should be applied. Project stages were defined as: (1) policy and planning; (2) project concept and technical design; (3) implementation and construction; and (4) long-term management and monitoring. The most frequently selected stage was the first stage – policy and planning – indicating a strong desire for principles to be applied at strategic and policy levels. Stage two was the stage which was second-most selected by participants, the implication of which is that the start of projects is a key moment in Green Infrastructure development. In interviews, participants also highlighted the need to think about long-term issues such as maintenance and monitoring as early as possible in the design phase to help shape a project and ensure its longevity. As a result, stage four (which is often overlooked in academic work on Green Infrastructure) was seen as a very important stage in the application of the proposed principles.

Much of the existing literature focuses on the ecological and socio-economic benefits of Green Infrastructure in a general sense. The work in this project has questioned how these benefits can be experienced in a more socially inclusive manner.

A clear outcome of the project’s approach to focus attention on Green Infrastructure development stages has been to highlight the need to attend, in more detail, to the actors that become involved in Green Infrastructure beyond architects and developers, such as contractors who maintain such spaces and the benefits this could bring.