Diversity in the Mix: The benefits of biodiversity for sustainable crop production 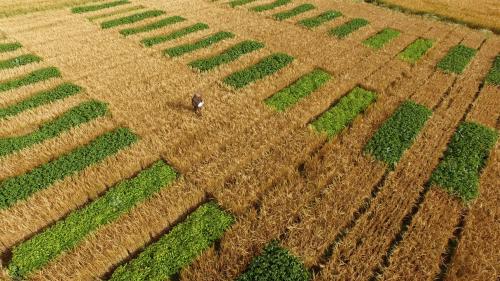 We are currently facing three major global challenges: climate change, biodiversity loss and the development of sustainable food production systems. Ideal solutions to these challenges would be ones that deliver win-wins, addressing at least two of these simultaneously. Our work on understanding the role of biodiversity in crop production systems considers whether such win-wins are possible. For example, can we introduce biodiversity back into crop systems, making such systems more sustainable with concurrent benefits for farmland biodiversity (which has seen some of the most substantial biodiversity declines in recent decades)? And if one of the benefits of reintroducing biodiversity into crop systems is increased resilience to climate change, can we take this a step further to achieve a win-win-win? Understanding whether such outcomes are possible, and the mechanisms that underpin them, is critical as we look to develop future farming systems.

Future farming systems will have to provide the food, fuel and fibre we need, deliver wider environmental benefits such as biodiversity conservation and reduced agrochemical use, and be resilient to the increasingly variable environmental conditions that we will face under climate change.

Biodiversity is the variety of life, including the variety of habitats, species, and genes. Substantial global declines in biodiversity have driven many people to ask whether biodiversity, in and of itself, has any effect on the way ecosystems function and deliver the ecosystem services on which we depend. To put it another way, if we keep hold of key species, does a decline in overall biodiversity really matter?

Our work has examined whether such relationships hold true in crop production systems. Modern agricultural practice has commonly resulted in monoculture cropping, where large areas of land are planted with a single species, and often a single cultivar. Such crop production systems have very low species and genetic diversity, suggesting that small increases in biodiversity in crop production systems could have substantial benefits for the functioning of those systems. Not only might these increase the productivity of the system (i.e. increasing the production of more crop), but they could also make that production more sustainable by enabling, for example, reduced fertiliser or pesticide use. Our work has explored how variation in the biodiversity of cropping systems can influence the function of these systems, as well as examining the mechanisms that underpin these effects.

We have undertaken a number of studies to look at different aspects of BEF relationships in crop production systems. In a field-based study, we explored whether it was simply the diversity of barley cultivars or variability in their form – their traits – which had the biggest impact on ecosystem function. We found no positive effects of barley cultivar diversity on barley yield but did find that the species richness of the weed community was reduced as cultivar diversity increased, indicating increased competitive exclusion of some weeds by the crop. This suggests that increased cultivar diversity might allow reduced use of herbicides for weed suppression. However, we also found a positive relationship between the diversity of species in the weed community and barley yield. This second finding suggests that competitive exclusion of some weed species, and reduced diversity in the weed community, might have negative impacts on other ecosystem functions which support crop production.

In a mesocosm (i.e. large pot) study, we again explored the relationship between barley cultivar diversity and ecosystem function. Here we focussed, in particular, on the resilience of BEF relationships to drought. We measured ecosystem functions in several ways, including barley yield and infection by a damaging barley pathogen. Increased cultivar diversity was again associated with greater weed suppression, and also with reduced disease severity on a susceptible cultivar. These effects were maintained under drought conditions, indicating that such benefits might be resilient to some of the impacts of climate change.

Finally, in a mesocosm and a field experiment we explored the relationships between rare arable plants and crop diversity. Some of our most threatened wild plant species occur in arable crop production systems. In a field-based experiment we found that the germination and establishment of a rare arable weed, Valerianella rimosa, responded positively to the presence of the barley crop. In a greenhouse-based mesocosm study we found that increased arable weed diversity had negative impacts on the establishment of rare weed species. Again, these studies indicate potential benefits from increasing the cultivar diversity of the crop. In this case it might reduce the diversity of common arable weeds, creating the right conditions for rare species to establish and survive. 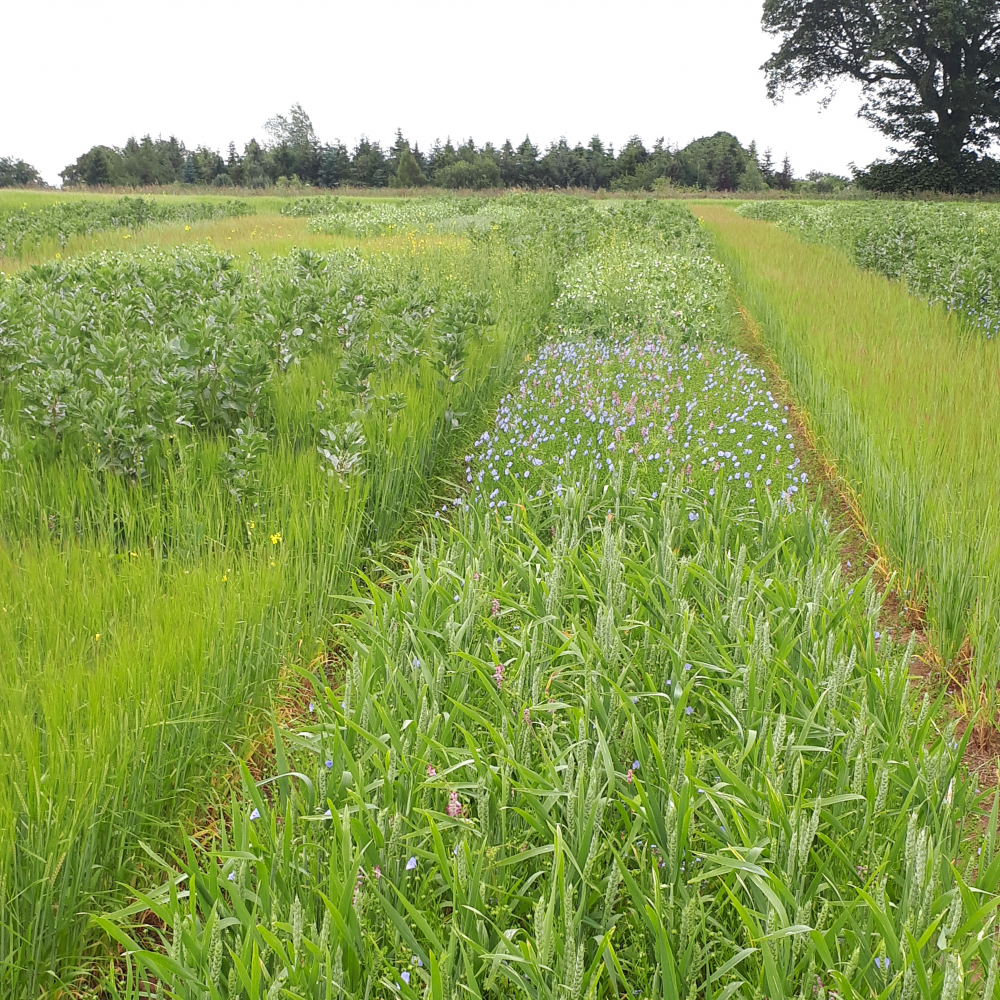 Our results indicate some promising opportunities for manipulating both crop and wider ecosystem diversity to help deliver more sustainable (i.e. lower input, more resilient and more biodiverse) crop production systems. However, they also indicate that there are subtle balances and potential trade-offs in these effects. For example, if we reduce common weed diversity through increased crop cultivar diversity this might have beneficial effects for rare arable plants, but might it also have negative consequences for other ecosystem functions, such as crop yield.

Fortunately, we have been able to link our work on crop mixtures in the Strategic Research Programme to other projects which are trying to understand the context-dependency of such benefits. These projects are also aiming to use this fundamental knowledge to provide guidance to farmers that want to use crop mixtures to deliver more sustainable crop production systems. In particular we have linked our work to activities being undertaken as part of the DIVERSify project, which aims to optimise the performance of crop species mixtures or ‘plant teams’ to improve yield stability, reduce pest and disease damage, and enhance stress resilience in agricultural systems. Further, in the SEAMS project we are working with farmers and local schools to communicate the opportunities for increasing agricultural sustainability and farmland biodiversity through the use of crop species mixtures.

Overall, this work is providing important information on approaches to developing sustainable crop production systems. This knowledge is vital as we look to work with farmers to provide a wider range of benefits from farmland as part of future agricultural support mechanisms.