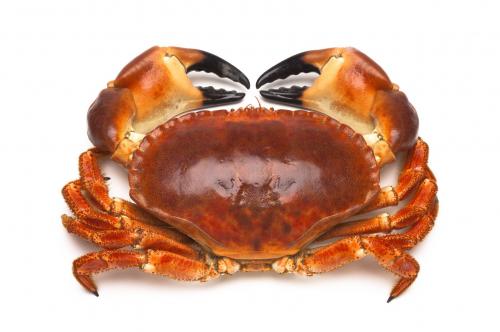 Crabmeat is an excellent source of protein but also provides good levels of important minerals, vitamins and beneficial omega-3 fatty acids. However, the meat from the brown crab (Cancer pagurus) can also contain the heavy metal cadmium, both in the white meat but especially so in the brown meat. Long term accumulation of cadmium is known to be toxic to human health. As there has been no scientific research carried out on the potential impacts or otherwise that crabmeat consumption may have on cadmium levels in humans, a study by SEFARI scientists has sought to investigate this. Our results show that habitual crabmeat consumers displayed no change in long-term cadmium exposure levels or kidney toxicity, compared to consumers who consumed little crabmeat. These results provide evidence that cadmium in crabmeat may be less of a risk to health than previously thought and may indicate that the toxicological effects of certain heavy metals may be modified when present within particular food products.

The Scottish crab industry is a very important commercial fishery for Scotland with total landings of around 13,000 tonnes and a value of £24 million in 2017. Moreover, the brown crab industry has increased significantly in recent years, fueled by the demand in the UK but also through significant exports to China and the Far East. However, whereas crabmeat provides a good source of protein and high levels of important minerals, vitamins and beneficial long chain omega-3 fatty acids, it can also contain the heavy metal cadmium. In humans, cadmium is toxic; predominantly affecting the kidney, but also causing bone demineralisation and is associated with an increased risk of some cancers including lung, bladder and breast.

In view of these concerns, this area was identified as a priority issue within the shellfish industry by Scottish crab processors who secured funding from the UK Sea Fish Industry Authority (Seafish) to address this issue through their 2015-18 Strategic Investment Programme (SIP). The Seafish SIP was set up to allow funding of strategically important work consistent with its Corporate Plan objectives to support the wider industry. Consequently, Orkney Fishermen’s Society Ltd and Macduff Shellfish (Scotland) Ltd, commissioned a study to investigate whether a causal link exists between crabmeat consumption and cadmium exposure.

SEFARI scientists were identified to carry out this work based on their expertise in trace element and heavy metal analysis, as well as their experience in conducting human studies gained through work funded by current and previous Strategic Research Programmes.

Evidence from previous studies had suggested that other nutrients such as selenium and zinc, which are both present at high levels in crabmeat, may counteract the toxicity of cadmium so the aim was to investigate this within a study of crabmeat consumers.

If a link was found between crab consumption and cadmium accumulation, this information could be utilised to better inform customers of any potential risks, in addition to potentially shaping new product development and industry marketing strategies. However, if no causal link was found then this could be used to help reassure consumers as well as regulatory bodies with regard to the potential effects on health of cadmium in brown crabmeat.

Overall, the knowledge gained from such a study will help the industry to better inform consumers of the healthiness of crabmeat whilst adding to the evidence base and debate around the likely risks of cadmium in the food chain and regulatory limits on intake set by legislative bodies including the European Food Safety Authority (EFSA).

These results provide evidence that the cadmium sometimes present in crabmeat may pose a lower risk to consumer health than previously thought.

The published findings from this study have provided the Scottish and UK shellfish industry with important evidence to reassure consumers about the health effects of their brown crab products and help promote consumer confidence in crabmeat products. Moreover, this research has added to the evidence base to help inform our understanding of heavy metal contaminant levels within the Scottish food chain and the level of risk that they may or may not pose to the population.

The research discussed in this study illustrates how SEFARI researchers add value to the research developed and under-pinned by the Strategic Research Programme (SRP) by attracting additional funding through direct interaction with industry.

This study links closely with work within the current Strategic Research Programme (SRP) which is investigating levels of heavy metals in a range of Scottish food products to estimate the potential risk they pose to consumers through dietary exposure and together the information gained will also help to inform and shape future work.