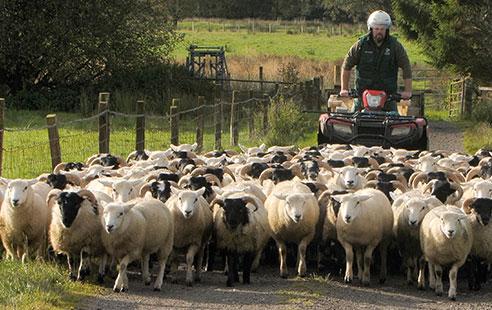 Arboviruses are transmitted by biting insects and cause disease in animals and humans. These viruses are spreading due to increased globalisation, international trade and travel and climate changes. Among these is bluetongue virus (BTV) transmitted by midges and causing fatal disease in sheep. The reasons why BTV (and other arboviruses) are so successful at causing disease are not fully understood. Such understanding is essential for developing new disease control strategies such as vaccines. By applying our unique skills in sheep immunology, we have discovered that BTV can infect and kill the very cells that stimulate the production of antibodies, This was the first description of such a mechanism in a sheep disease and provides a unique perspective on how arboviruses can cause rapid and fatal diseases.

Infectious diseases adversely affect the health and welfare of humans and animals. Losses due to infectious diseases in livestock, such as sheep, can also have major economic impacts. Vaccination is a sustainable means of disease prevention, but the development of new vaccines requires an understanding of how infections lead to disease and also how the immune system combats infections. Some infections cause severe disease in previously healthy animals that should be capable of making good immune responses. The reasons for this are unclear.

Bluetongue virus (BTV) is a viral disease similar to other arboviruses in that it is transmitted into the skin by a bite from female midges. BTV affects ruminant livestock with symptoms more severe in sheep (fever, difficulty breathing and swallowing and swollen feet and faces). Like the name suggests, on rare occasions BTV can turn sheep’s tongues blue if swelling restricts circulation in the mouth.

BTV was first reported in Africa in the 19th century but has since spread around the world. Recently, BTV has moved northwards to several European countries, including those in Scandinavia and also southern parts of the UK. Climate change is an important factor in this spread: warmer, wetter conditions allow midges to be active for longer throughout the year while warmer temperatures allows the virus replicate faster and for more midges to carry BTV. This makes it likely than BTV will continue to spread northwards and, if left uncontrolled, the disease could have devastating implications for the UK sheep and cattle industries. The most recent outbreaks in northern Europe (2006-2010) resulted in losses of hundreds of millions of pounds.

Lymph node samples were collected from sheep that had been infected with  BVT and analysed for the presence of BTV and specific populations of immune cells in the hours and days immediately following infection. These cells normally help to stimulate antibody production that control infection. We discovered that BTV was replicating in a population of lymph node cells known as follicular dendritic cells (FDCs). This was associated with a progressive loss of FDCs in the lymph nodes of the infected sheep. Since FDCs are important for stimulating immune responses, we tested how BTV infection affected antibody responses to a protein unrelated to the virus itself. We discovered that the antibody responses were indeed suppressed and BTV actively prevents the development of immune responses following infection. This is the first description of such a mechanism in a sheep disease and offers a unique perspective on how BTV causes severe disease in sheep.

The work has shown how BTV can suppress immune responses in sheep by infecting and destroying a specific population of cells in the lymph nodes. This not only provides new knowledge on how arboviruses cause disease, but also on the cells in sheep lymph nodes that stimulate antibody responses (FDCs). If we can find ways to specifically target an activate FDCs we have the potential to improve immune responses and make vaccines more effective, not only for viral but also for other types of infections.