Vertical farming - is the sky the limit?

Vertical farming - is the sky the limit? 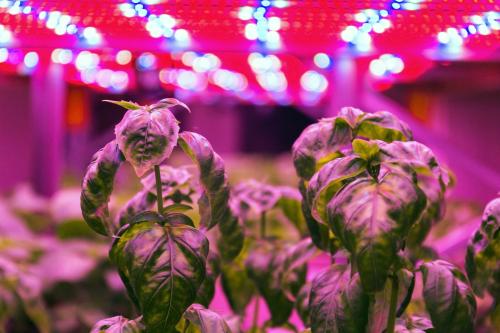 During COP26 the contribution of agriculture and food production to greenhouse gas emissions was discussed and, goals were set to tackle the global challenges of climate change. With COP27 taking place this November, it is becoming increasingly evident and more important than ever that we address sustainable practices on an individual and community level, as well as at the global level.

The global food system is thought to account for around one third of global greenhouse emissions  which contribute to climate change. It is estimated that food production, which includes growing, transport and processing,  contributes to 15-30% of total greenhouse gas (GHG) emissions in the UK. In 2020 the UK imported 46% of the food consumed, specifically with 84% of fresh fruit and 46% vegetables being imported from outside the UK. This food system is environmentally unstainable and poses a threat to national food security.

Furthermore, this unequitable food system creates damage at a societal and health level. It contributes to health inequalities and public health crises including malnutrition and obesity. The Food Standard Agency reported that 13% of UK adults live in “marginally food secure households” and 8% live in food insecure households: “low or very low food secure”.

In addition, the UK has an increasing number of people who are overweight and obese. The Scottish health survey  reported that two in three adults are now overweight. Improving poor diets, e.g., diets low in fruit and vegetables, low in nuts and seeds, low in whole grains and high in sodium will help to prevent one in every five deaths globally. While a dietary shift to predominantly plant-based diets - rich in fruit and vegetables is also a key factor in improving health while reducing environmental impacts.

The Scottish government have published a policy with the goal of Scotland becoming “a Good Food Nation” by 2025 with everyone having access to sustainable and healthy diets. Food producers, traders, policymakers and final consumers all play an important role in achieving this vision. With population growth and rising shortages of farmland for local urban food supplies, vertical farming has the potential to support local food production and security.

A vertical farm can be described as a farm in a box. It is an indoor growth facility, where plants grow in multiple layers and all growth conditions are controlled (light, temperature, humidity, carbon dioxide concentration). Thus, it is possible to optimise growing conditions resulting in higher quality and productivity. This also means that the area is bio secure and there is no need for pesticides resulting in crops not needing to be washed and having longer shelf lives.

An important factor is the energy use of vertical farming, the primary light source in vertical farms are LED lights. The light intensity can be adjusted, and the light spectrum can be changed.  This is very exciting as this can influence the growth as well as antioxidant, mineral and phytochemical content of the plants, resulting in higher nutritional value. Currently, production is limited to leafy greens, tomatoes, herbs, flowers and microgreens.

Vertical growth towers play a part of the Advanced Plant Growth Centre (APGC) project in which the James Hutton Institute will collaborate with industry and academic partners. Our SEFARI research plans to analyse plants grown in vertical farms under different conditions, in collaboration with The James Hutton Institute and Intelligent Growth Solutions, to see what effect this will have on the nutritional content.

Parallel to this an exciting project by Scotland's Rural College (SRUC), also supported by the Scottish Government, will build a vertical farm on King’s Buildings campus in Edinburgh to be used for research and education.

The cost of designing and establishing a vertical farm is quite substantial. However, the long-term potential makes vertical farms attractive to invest in.

With vertical farms located close to or in cities, this will also bring food miles down considerably. Shortening the supply chain heightens the resilience to global shocks e.g. covid-19 pandemic and thus increases the level of food security, while reducing greenhouse gas emissions caused by food transport. However, vertical farm energy use is relatively high compared to conventional agriculture but the nation’s goal of generating Scottish energy consumption from renewables alone would tackle any associated environmental impacts.

In addition to making fresh and nutritious food available on a local level, vertical farming could provide benefits to local communities. Vertical farms give the opportunity of promoting the local economy while creating a community space, and can involve those living in deprived parts of communities whilst creating access to local, fresh produce on a regular basis.

Finally, as vertical farming is a relatively new technology, we plan to raise awareness of this farming approach and explore the opinions of Scottish consumers towards using this farming method as a food source.