Exploring the Twitterverse – What can we learn about engaging with farmers on social media?

Exploring the Twitterverse – What can we learn about engaging with farmers on social media? 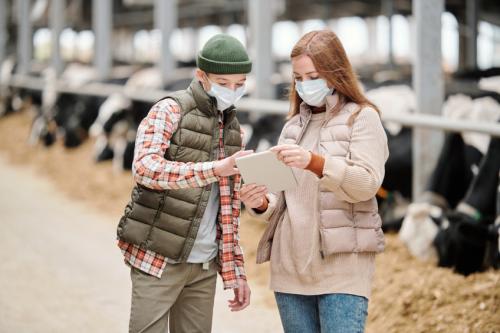 In this blog, we investigate how farmers interact on the online platform Twitter, with the aim of helping scientists to better facilitate mutual learning and support good farm practice.

Online spaces offer the advantage of promoting open discussions with a large amount of people in real time. However, as almost anyone can use and participate in these discussions that can sometimes create issues around the credibility, accuracy and useability of the information shared. Our aim is to better understand how to help individual farmers to find and share accurate and practical information from trusted sources.

New research, involving a partnership across the Portfolio between Scotland’s Rural College (SRUC), SEFARI Gateway and the Plant Health Centre, has been examining a tale as old as agriculture – how farmers discuss farming. Farmers are quite a sociable group, often discussing on-farm practices with friends and colleagues who are farmers and/or those who engage in some aspect of agriculture. This in-group communication is important and can often influence farmers’ own on-farm behaviours and what influences farmer behaviours has long been a topic of interest to SEFARI researchers.

In this latest project, we wanted to know if this level of farmer in-group engagement extends to social media platforms like Twitter and Facebook and, if so, whether interactions can be/are being extended beyond these circles. We began by collecting a large amount of social media data every day for the entirety of 2019 and analysed this big data using machine learning and natural language processing (NLP).  We also collected public data from agriculture stakeholders, policy makers and researchers in Scotland. Alongside collecting data, and with support from the SEFARI Gateway Responsive Opportunity Fund, we were keen to talk directly to a variety of stakeholders, such as scientists working in agriculture, policymakers and farmers themselves, and learn from their social media experience.

Results confirmed that farmers are in high levels of engagement with one another on Twitter providing evidence that social media is a potential avenue for scientific information to get to the farm (see Figure 1). As well as establishing that farmers are engaging on Twitter (and discussing agriculture), we also set about trying to learn how to effectively engage with farmers online, to aid us with sharing information that is important to farming practices in a much faster, more specific, and relevant manner, while still retaining accuracy.

We found that researchers, policy makers and agricultural stakeholders are engaged on Twitter too, and that each group appears to be somewhat isolated, and interaction with other groups is limited. To better understand this we asked farmers, scientists, knowledge exchange experts and agricultural stakeholders to participate in a workshop to discuss some of our findings and offer their view on what may influence online interactions. We learned that farmers tend to be more relaxed on social media, whilst most researchers and stakeholders tend to be a more formal in what they tweet to maintain an organisational tone, retain credibility and reduce the risks often associated with online engagement. This difference in approach could actually highlight a potential barrier to effective dialogue.

We also learned that there are a few simple tricks that users can employ to have a wider reach and make a bigger impact on social media. For instance, we identified a phenomenon we are calling ‘tweet launching’, which can really help to promote new research. Tweet launching occurs when a trusted institution (with many followers) retweets a smaller (measured in number of followers) user’s post, usually about their research/activities. This then “launches” that user’s work or research to a wider audience.

For further details on our research, and more tips, see the report.

Looking towards the future, we are hoping to report the full project results in a peer reviewed publication, so watch this space. This research is also being further explored in a project funded by the Plant Health Centre, which is currently conducting a national survey of Scottish farmers about a variety of things, including their social media use. Finally, we’d also like to better understand how farmers use social media based in the form of survey research.