Eat them to beat them: Can Invasive Plants be Harnessed to Provide a Sustainable Source of Protein?

Eat them to beat them: Can Invasive Plants be Harnessed to Provide a Sustainable Source of Protein? 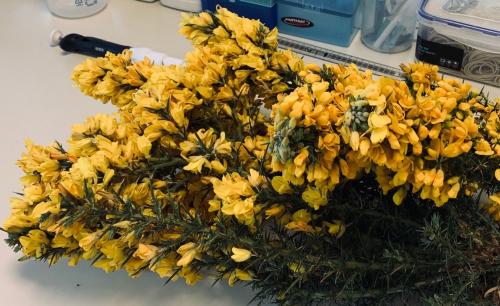 Agriculture bears the brunt of having to reliably supply food, ensure its own economic viability, while complying with environmental concerns. Farming comes under a lot of pressure to deliver produce, despite unfavourable climatic variation, changes in pest behaviour and the control of invasive plants.

In this blog, Ajay Iyer and Wendy Russell consider a different approach and discuss how invasive or “undesirable” plants such as Gorse (Ulex europaeus) could serve as an alternate and sustainable source of protein.

Herbicide usage in Scotland is currently as high as 1 kg/ha and depending on the quality and brand, their prices range between (£13-18/L). Consequently, in Scotland, the total annual expenditure on pesticides against unwanted plants amounts to approximately £5.6 million (around 1.2 % of the agricultural contribution to Scottish GDP). Moreover, the detrimental effects of pesticides is an ongoing debate and there are concerns around the effects of long-term exposure and bioaccumulation of these compounds within the food supply chain.

A circular economy attempts to achieve the minimisation of waste and resource consumption. Invasive plants lend themselves well to food supply systems via a circular economy, as the unwanted biomass can be effectively revalorized using leaf protein extraction and purification procedures.

Through a SEFARI Gateway funded Think-Tank, several invasive plant species with the potential for revalorisation were identified, namely; gorse, broom, fireweed and bracken. These plants were characterised for their total protein and fibre composition, as well as for the presence of potentially important bioactive molecules. Among the plants we investigated, gorse was found to have the highest amount of soluble protein, no known major anti-nutrients (which can block or interfere with how the body absorbs other nutrients) that could effect use as a novel food and was rich in phenolic compounds, many of which have been shown to be anti-inflammatory, with the potential to benefit health.

Gorse as well as broom and fireweed have a history of consumption, particularly as animal fodder or for medicinal purposes and gorse flowers are currently being used to flavour gin. Whereas bracken presents an interesting challenge due to the presence of ptaquiloside; a known carcinogen. Further developmental work to remove this carcinogen could help unlock a larger pool of sustainable protein. Gorse contains around 11.5% of total protein. After optimising extraction and purification procedures, we were able to develop a process by which more than 56.6% of the total leaf protein could be recovered at purities greater than 95%.

The ability to quickly and efficiently obtain high quality protein from gorse is promising and has application both in Scotland, and globally. Gorse protein also contains amino acids that are essential for contributing towards meeting nutritional requirements. Gorse is high in branched-chain amino acids and our optimised extraction and purification stages ensured minimal loss of important sulphur-containing amino acids. The gorse protein fraction also retained some of the anti-inflammatory phenolic compounds including flavanols, chlorogenic acid and other cinnamic acid derivatives with potential benefits for heathy food formulation.

Directly obtaining protein from plants is far more energy and carbon efficient when compared to consuming them indirectly via animal products. In a laboratory setting, the plant proteins were obtained with very low estimated emissions of approximately 4.5-6 kg.CO2 /kg protein. In comparison, the emissions associated to Scottish beef is around 102 kg.CO2 /kg protein. Of course, there is scope for improving estimates for more accurate comparisons by including emissions associated with land use, plant removal, grinding and pre-extraction stages but this was unfeasible in this laboratory scale investigation.

Widespread adoption of leaf protein concentrates in daily foods is absent mostly due to insufficient investigation towards understanding their functional properties and either successfully replacing animal-based ingredients or creating novel food products. Diverting resources from invasive plant removal through herbicides and burning, to leaf protein extraction may provide alternate and more sustainable protein sources that can complement existing food production. With appropriate measures in place, this approach has the potential to support more effective land use, help with achieving emission targets, while simultaneously aiding the conservation of native plant species.

Development of a process that can efficiently extract protein from invasive plants has global application. Gorse is a particular problem in Oceania, where it was introduced as an ornamental plant and has now overtaken large parts of the New Zealand and Australian landscape irreversibly damaging local ecosystems. However, this proof-of-principal technology for invasive plant biomass revalorisation could be transferred to other plants in countries such as such as Namibia, Malawi and Somalia that have comparable marginal land area (as percentage of total land mass) to Scotland, but are also low-income agrarian economies dependent on effective land use.

Figure Legend: Gorse has spread prolifically across the world, particularly in areas such as Oceania where it was introduced as an ornamental plant, as well as to build natural barriers around private properties

Leaf protein extraction is an idea as old, if not older, than the Green revolution. However, revisiting it through the lens of conservation and ‘circular economy’ (a production scheme centred around the principle of reduce/reuse/recycle) may help achieve sustainable food production targets without directly competing with the existing food systems.