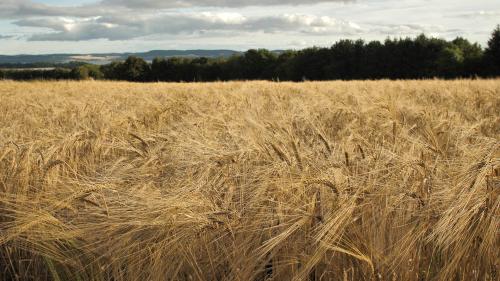 We are pleased that Bob Rees, Scotland’s Rural College is able discuss reducing greenhouse gas emissions from cropping systems. This post was originally published by the Scottish Parliament’s Information Centre (SPICe), who commissioned SEFARI to write a series of blogs to stimulate debate on this issue. SEFARI research takes a collaborative approach and looks at this complex and challenging issue from multiple perspectives, including improving animal health, the role of precision agriculture and changing dietary intake to reduce greenhouse gas emissions.

The Intergovernmental Panel on Climate Change (IPCC) have released a stark warning of the consequences of uncontrolled greenhouse gas emissions in a recent Special Report. We now recognise that to avoid dangerous climate change, it will be necessary to limit global temperature rises to no more than 1.5oC above preindustrial levels.

To achieve this, we need to bring net emissions down from current levels to zero by the middle of this century. This is a truly herculean task and will require changes to many aspects of the way in which we live, work and travel. One of the issues highlighted by the Intergovernmental Panel, which may come as a surprise to many, is the importance of agriculture and food production and consumption in contributing to emissions.

In Scotland, agriculture is responsible for an increasing share of the country’s emissions as other sectors of the economy change. The most recent statistics show that agriculture and associated land use were the second largest source of emissions (after transport) in 2016. Given the current ambition of the Scottish Government to reduce emissions by 80% by 2050 (and this target is likely to be strengthened to 90% if the Bill is passed to comply with the IPCC’s recommendations), agriculture clearly has a role to play in contributing to climate change mitigation.

Agricultural emissions of greenhouse gases tend to be different from those in other sectors. They result mostly from nitrous oxide and methane production, both of which are produced by biological processes (nitrous oxide coming from nitrogen fertilisers and manures, and methane being produced by ruminant livestock – predominantly sheep and cattle), rather than through the combustion of fossil fuels.

Their production therefore is widely distributed across agricultural landscapes, and these features of the emissions have made them harder to control. However, work being undertaken as part of the Scottish Government’s Strategic Research Programme is seeking to identify measures that can help reduce emissions without compromising on productivity. In cropping systems these approaches revolve around improved nitrogen and soil management.

Greenhouse gas emissions rise sharply in circumstances where fertilisers are applied at rates in excess of crop demand. Therefore, it is important to avoid excess applications of nitrogen based fertiliser – nitrous oxide is a key greenhouse gas.

In wetter and more acid conditions often associated with grasslands, fertilisers containing urea have been shown to have lower emissions of greenhouse gases than other nitrogen based ones. An even more effective way of reducing emissions from fertilisers is to use them in combination with a nitrification inhibitor to slow down emissions. Commercial products are available, although the cost is slightly higher than that of conventional fertilisers.

Legumes have beneficial (known as symbiotic) relationships with nitrogen fixing bacteria, and require little or no synthetic fertilisers. So, the inclusion of legumes within a crop rotation (either as forage legumes such as clover or grain legumes such as peas and beans), can help reduce overall fertiliser nitrogen use both as a result of reduced direct applications, and because of carryover from the legume crop to a following crop (through the decomposition of crop residues).

Maintaining good soil conditions is an important approach that can help to reduce greenhouse gas emissions from cropping systems. This includes maintaining the correct pH for the crop being grown and ensuring that the soil is well drained.

Another factor that contributes to good soil quality is the presence of organic matter.  Soil organic matter is rich in carbon and at the global scale, our soils contain more carbon than the atmosphere. It is argued that we could make more effective use of plants to draw carbon dioxide out of the atmosphere and return it to soil organic matter. This would then offset some of the emissions associated with agricultural methane and nitrous oxide production. There is evidence to suggest that there are opportunities to increase soil carbon storage. Recent research in Scotland has shown that as grasslands age they are able to store more carbon. We also know that in recent decades our soils have become depleted in carbon stocks.

It is clear that a range of measures are available to reduce greenhouse gas emissions from farming systems. Many of these are also sensible approaches that support the efficient use of resources within a farming enterprise.

Scotland’s Rural College have recently developed a carbon footprinting tool called Ag RE Calc that not only calculates the carbon footprint of a farming enterprise, but also benchmarks the farm against similar farm businesses and identifies opportunities to both improve efficiency and reduce greenhouse gas emissions.