Is Smart Farming a solution for Scottish agriculture?

Is Smart Farming a solution for Scottish agriculture? 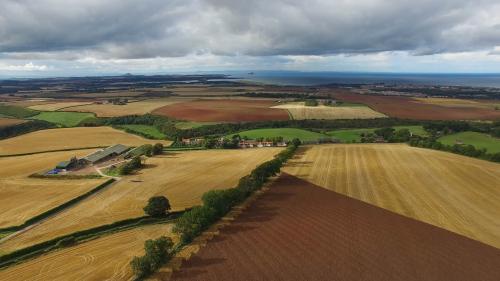 We are pleased that Andrew Barnes and Vera Eory, Scotland’s Rural College are able to discuss the role of precision agriculture in reducing greenhouse gas emissions. This post was originally published by the Scottish Parliament’s Information Centre (SPICe), who commissioned SEFARI to write a series of blogs to stimulate debate on this issue. SEFARI research takes a collaborative approach and looks at this complex and challenging issue from multiple perspectives, including improving animal health, changing dietary intake, and the role of cropping systems to reduce greenhouse gas emissions.

Farmers now have access to a wide range of modern farm management support tools and services.  Smart farming refers to an approach which applies in-depth and frequently collected data with real-time processing to provide information for agricultural decision making.

Precision agricultural technologies (PATs) are important to SMART farming because they allow for the management of tasks with multiple variables. The most common arable PATs are machine guidance technologies, which pilot machinery using Global Positioning Systems (GPS) for greater accuracy. Variable rate technologies, also used in combination with GPS, apply inputs such as fertilisers or pesticides at differing rates to accommodate in-field variation.

The predicted farm-level effects of these PATs is impressive.  Studies have found increases in physical productivity from saving inputs, as well as reductions in farmer time and, by extension, economic benefits to the farmer. Savings on fertiliser and energy use could contribute to reducing agricultural greenhouse gas emissions in Scotland by 2 – 4% if machine guidance and variable rate technologies were adopted on half of arable farms which are bigger than 50 hectares.

Conclusions from recent survey on PATs

The following issues are key considerations for increasing the uptake of PATs amongst Scottish wheat and potato growers, following a recent survey by the authors.

The main barrier seems to be the high cost of entry.  Bigger farms tend to be more likely to adopt PATs, compared to smaller farms, but also very large farms are more likely to adopt bundles of these technologies. Income support payments, currently available under the Common Agricultural Policy, are now decoupled from production and may encourage risk taking which indirectly supports adoption of newer technologies, like PATs.

Therefore, reductions in support payments may lead to two directions of travel for farming communities. Effectively, larger farmers will be the primary users of PATs, whereas the remainder will be non, or low-level adopters. The reduction of subsidy, which could negate some of the risk to investment, may further remove the incentive for this community to participate and therefore create further inequalities in the farming sector.

Assessing the payoff for investment

Uptake of PATs may also suggest a particular attitude, or explicit profit driven approach to farming.  The survey found that wheat and potato growers with less uncertainty towards the economic return of PATs were more likely to invest in them.   A lack of certainty towards whether the PAT would pay off may also echo findings that farmers do not trust experimental farm studies given the potential differences between their fields and that of the test sites.

It may also be the case that farmers who positively perceive that PATs would payback have ‘post-purchase rationalization bias’. Effectively, given the high level of investment required, farmers seek self-assurance or legitimacy to validate their decisions and may view outcomes as more positive, even though they haven’t experienced these benefits yet.

Variable rate technologies require a further investment in learning and there may be a gap between industry support and user ability to operate machines optimally. Around half of the survey respondents ranked some form of training as a potential incentive to encourage uptake. The newly established Agricultural Engineering Precision Innovation Centre at Bush Estate on the outskirts of Edinburgh has a potential role in this. The Centre is one of four Agri-Tech centres recently established by the UK Government.

There are concerns however over whether a tool which increases efficiency will lead to more input use. This is known as a ‘rebound’ effect where technologies which increase resource use efficiency lead to unintended resource depletion as systems increase in scale and use up more of that resource.  Given that farmers are on a technology treadmill, chasing lower margins, this may be an unintended result of these technologies.

Should there be public support?

The development of PATs is an example where commercialisation by industry will recoup private returns.  Therefore, focusing policy and incentives on engagement in knowledge building and demonstration of PATs to encourage efficient use and uptake may be more justified. Similarly, the provision of free detailed geospatial mapping may encourage uptake in the industry, and support innovation.

Does PAT challenge what a ‘good farmer’ should be?

By its nature machine guidance ploughs straight fields with little or no interaction from the farmer.  However, ploughing straight fields has been found to be a ‘badge of merit’ and plays a part in rural identity.  Moreover, the operation of variable rate technology, which provides a more codified approach towards the differences in a farm’s terrain contrasts with the embedded knowledge of the farmer.  A strong thread within the farmers surveyed did not intend to adopt PATs stating that they already ‘knew their own fields’.

Where does it sit with other types of farming?

There is a further cultural challenge to PATs, as it represents a distinctively technological approach to agriculture that may not match the perspectives of small-scale, or organic and low-input farmers who could benefit from adoption of PATs but are deterred by this technological ethos.