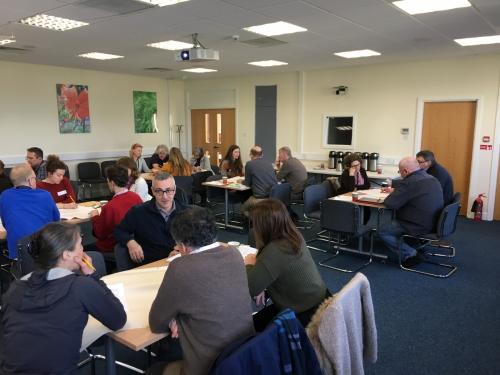 Following on from my earlier blog, the two workshops on extreme climate change scenarios were held at the James Hutton Institute on the 29th of January and 5th of February 2019, as planned. The workshops were intended to drive discussion about possible future research challenges in relation to climate change, and to identify ways in which different stakeholders might tackle these challenges.

The events were well attended (over 50 people participated), with groups discussing different scenarios of extreme climate change in Scotland and this blog outlines many of the key points raised in the workshop discussions.

Six scenarios, each telling a different ‘future history’ about the effects of extreme climate change in Scotland were presented to participants. The scenarios were set between 2030 and 2080 and covered a wide range of potential impacts. For each one, I tried to make them both interesting and realistic, and to provide a story that would engage the attendees and make them think.

The style of the scenarios was derived from the text of existing climate change scenarios and the ‘Shared Socioeconomic Pathways’ developed to explore a wide range of possible futures under different CO2 emissions pathways. The scenarios presented at the workshop were shorter and less extensive in their coverage, to allow participants to focus on specific questions.

Discussion was animated and interesting, with most people finding the day both useful and informative. Several people commented that they enjoyed thinking about scenarios they had not considered before.  The scenarios have the potential to influence everyone’s lives and this real-life approach helped participants to see the relevance to them and the need for action. I was pleased with this response as I wanted to stimulate strong reactions and relevant discussions and avoid purely abstract debate. This approach certainly helped to get everyone talking!

The possibilities of intervening actively in both our economic model and ecosystem (on land and sea) were raised several times. Challenges relating to the development of policy and agricultural payment systems were identified. Introduction of novel crops and food sources provoked lively debate, with research topics ranging from the specific to the more speculative. Several groups also raised research is needed to identify novel crops for marginal land.

A lot of the research topics identified were socioeconomic, ranging across a broad spectrum. These included ‘social engineering’ challenges (centralised planning to manage social change, for example a ‘sugar tax’) relating to subsidies and taxation, cultural barriers and education to encourage acceptance of new behaviours and prepare the workforce for jobs of the future. There was also a lot of discussion about the way transition from a market economy to a more centrally-controlled system of production in relevant areas could be achieved without realising fears of authoritarianism and social unrest and increasing the level of engagement between policymakers and the public.

Finding new ways to provide policymakers with the evidence and answers they need to develop new legislation was a common theme. Around this was a general discussion about political activism, the positive and negative role of social media, political extremism and consent to be governed, decentralisation of production systems and the use of taxation ‘levers’ for changing individual behaviour.

Limiting future damage to the environment was discussed by all groups, with research areas including soil loss, novel land management techniques, improvements to the circular economy and water conservation. Understanding and monitoring the spread of pathogens (human, animal and crop) was seen as important. Some of the areas explored included changes to the way the landscape is perceived and managed, including how to implement radical land ownership, environmental regulation and food production solutions.

The development of new technologies to solve existing and future climate change problems were discussed less than anticipated. Possibly this indicates the pragmatism and expertise of the people attending, who largely acknowledged that social change was more likely to make a difference than technological ‘miracle cures’. Innovation in crop breeding was one topic discussed, but it was far outweighed by the need to change agricultural production towards lower-input systems with greater emphasis on crops for human consumption and reduced livestock and dairy production. Research into the genetics and biodiversity of our agricultural and marine environment was certainly seen as more urgent than large-scale engineering solutions to future climate-related issues.

This blog will be followed by a more comprehensive report, my aim is to stimulate discussion and help to inform the development of relevant funding proposals and institutional decision-making in the future. Outputs could help to inform the recently announced Scottish Government consultation on Scotland’s Climate Change Adaption Programme 2019-2024, for example.

Overall the workshops provided plenty of food for thought on a subject that will be important to us all long into the future. It was clear from the discussions that we need to start preparing now, in terms of infrastructure and strategic planning, for the challenges climate change will bring to our future.

The full report can be found here.