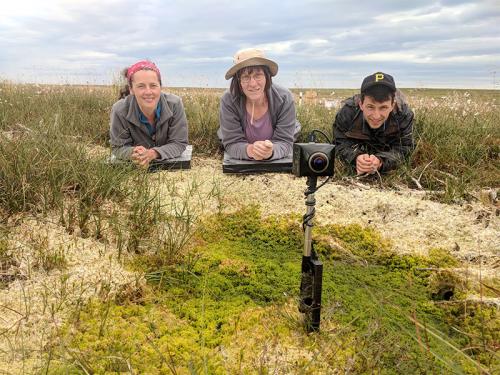 We are pleased that Dr Rebekka Artz and Gillian Donaldson-Selby, The James Hutton Institute can share their experiences on making a new 360° film about the importance of peatland restoration for helping to mitigate climate change. Rebekka and Gillian led a project team who were awarded SEFARI Gateway Responsive Opportunity Funds (ROF) to create this film. This film was premiered at the IUCN Peatland Programme 2018 conference.

We first met Andrew Macdonald, ExhibitScotland, at the Royal Highland Show (RHS) in 2017. Staffing the Virtual Reality corner for RSPB in the Education tent, he first showed us his 360 film shot at Abernethy. If you’ve never been to the RHS, it is a bustling, noisy and thoroughly adrenaline-charged four days showcasing everything related to farming and rural life. Within seconds of putting on our headsets, we felt our heartbeats calming down. A minute later, we were admiring midges dancing in a Scottish pine woodland and had forgotten about the throng of people behind us. Clearly, Andrew was the person who could help us film an immersive experience on peatlands!

Peatlands are internationally important habitats for wildlife and soil organisms, they provide us with clean drinking water and are iconic and culturally significant Scottish landscapes. Peatland restoration is one of the major policy interventions in Scotland’s Climate Change Plan, with a target of 20,000 hectares per year. Peatlands in good condition are net carbon sinks, while degraded sites can emit substantial amounts of carbon, contributing to climate change. Since the start of this millennium, over £10 million has been spent on publicly funded restoration projects to reduce Scotland’s net carbon emissions.

Fast forward to mid-July 2018. As a group of researchers, including staff at the James Hutton Institute, SRUC and RGBE, we have been awarded a grant by SEFARI to make a film on the benefits of peatland restoration in relation to climate change. With partners at SNH Peatland Action, RSPB and Scottish Wildlife Trust, we are all set to do some filming!

We wind our way up the hill at Balmoral Estate, with a 4x4 truck full of fencing materials to protect our newly constructed micro-meteorological station against inquisitive deer. This equipment was funded by SNH Peatland Action and is currently monitoring the carbon dioxide emissions from an eroded upland peatland. The site is being restored and our monitoring equipment will enable us to see exactly how much of a difference restoration makes to the net carbon dioxide emissions.

Andrew and the Balmoral Estate staff get roped in to put the fence in as quickly as we can, to leave some time for filming. We hide in a deep erosion gully while Mhairi records a piece about how greenhouse gas emissions are measured at this site. Talking to the camera is challenging for us all, and the 360° filming experience is something different, as there is nobody else there but the camera. A piece of 30 seconds of material can easily take half an hour to get right, with gusty winds and rain enforcing stops, or losing your thread halfway through recording. 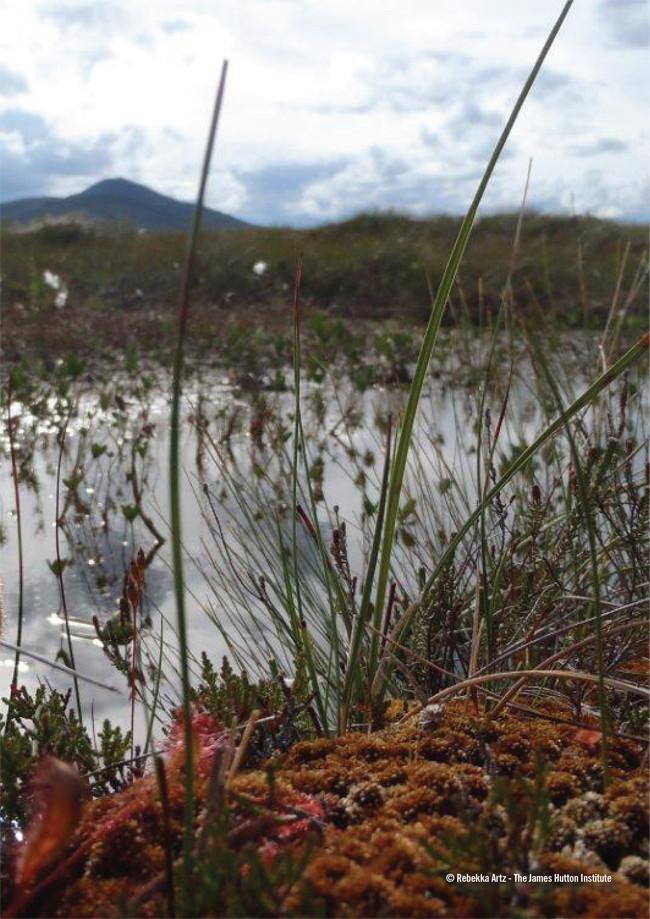 We drive five hours north to film at the RSPB Forsinard Flows. This is our long-term monitoring site, where we have been investigating the effects of the RSPB’s forest-to-bog restoration programme on biodiversity and greenhouse gas emissions for several years, through a consortium of researchers at James Hutton Institute, University of Exeter, Centre for Ecology and Hydrology and University of the Highlands and Islands.

The weather is bright and the skies dramatic, but there is a fierce wind at times, limiting our ability to do any filming. To add to the complexity, the week was fully earmarked for getting monitoring equipment re-located, data downloaded, and new experiments installed to investigate the resilience of restored peatlands to climate change (as part of our work for the Scottish Government funded Strategic Research Programme).

The days end up getting very long. We start early, sometimes forget to eat or drink, somehow cram in the filming around all the other work and laugh a lot. Staying at the RSPB field centre also means we get to eat together, laugh some more, and then review the days’ footage until the small hours.

The evenings in the weeks after the days in the field are spent checking through raw footage, first edits, second edits, organising additional film material, getting logo’s, permissions forms, legal queries, testing the nearly completed film on VR headsets, screens, and the Virtual Landscape Theatre and, magically…looking at some Sphagnum microscopic images turned into an immersive experience.

We are nearly there now…has the film turned out as well as we all hoped? We will find out soon at the IUCN Peatland Programme 2018 conference. We will be hoping to take them out of the throngs of the conference and immerse them in these vast and critically important expanses.