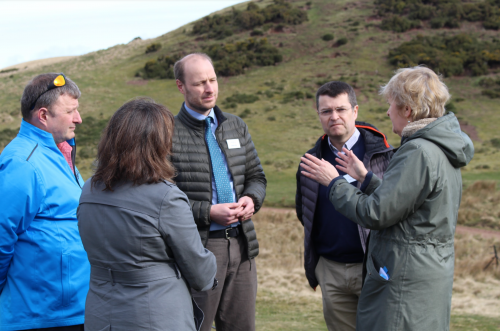 Today sees the launch of SEFARI – ushering in a new era of collaboration between six of Scotland’s leading Research Institutes – each with their own capabilities and global reputation.

Today sees the launch of SEFARI – ushering in a new era of collaboration between six of Scotland’s leading Research Institutes – each with their own capabilities and global reputation.

We were pleased to welcome the Cabinet Secretary for the Environment, Climate Change and Land Reform, Roseanna Cunningham MSP to launch this new era of collective practice. We persuaded her to go up a hill with us for the launch, not traditional territory, but do read my post to be published tomorrow on the Scottish Government’s Scotland’s Environment Blog for more on why this was important to us.

The SEFARI name itself – Scottish Environment, Food and Agriculture Research Institutes – gives a sense of some of the type of work done by the six Research Institutes involved. This includes critical work done with and for the Scottish Government under a £250m five-year research programme – this is serious stuff.

Some of the Institutes you will have heard of, others perhaps not – but we’ll use the SEFARI blog to open the lid a little on what goes on in the Moredun Research Institute, Scotland’s Rural College, the Rowett Institute, Biomathematics and Statistics Scotland, Royal Botanic Garden Edinburgh and the James Hutton Institute – and critically, how they work together as a collective.

Whether you live in a hamlet or a bustling city, if you stay by the sea or halfway up a mountain, the research being undertaken on your behalf – and with public money – is of relevance.

Some of it relates to the health of plants and animals in our country, other aspects relate to wider land use practices, ecology and biodiversity (and how these interact with each other). Other work is done on mitigation of, or adaptation to, climate change. Critical work is also being done on food security, nutrition and crop development. That just scratches the surface.

SEFARI will improve the use and impact of that research – for business, policy-makers, individuals and communities. The better the evidence base, the more informed choices we can all make. We’ll be working hard on that, but we have already kicked off activities to unlock the potential that exists within the Research Institutes to deliver what we call “Leading Ideas for Better Lives”.

We’ll explore that concept more in later posts, but for now, please work with us, or follow us on our journey – we’re blogging and tweeting, but we’ll be developing more of a digital presence as we evolve. Stay tuned!