The Fruits of Their Labour: Seasonal Farm Workers in Scottish Agriculture 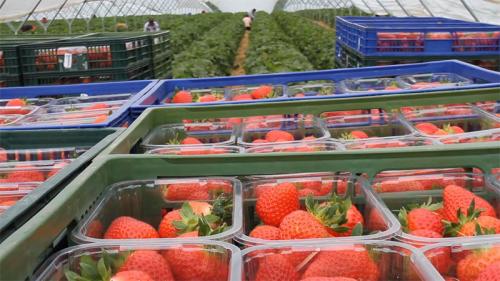 Scotland’s agricultural sector relies heavily on seasonal non-UK workers, particularly from central and eastern Europe, to meet its labour demand. Despite their importance for this sector, there was a lack of detailed information about the actual numbers of migrant workers working in Scotland and their living and working conditions. This case study summarises the results of a Scottish Government funded study aimed at improving our understanding in this area. This case study complements a guest blog and briefing for the Scottish Parliament Information Centre which is available here.

In Scotland the horticulture and potato sectors are reliant on seasonal labour to undertake key planting, harvesting, grading and processing tasks on farms – tasks with no real mechanical alternative. Historically, a lot of the work was undertaken by local people or students looking for working holidays and an opportunity to generate some money.

With the advent of minimum wages in the late 1990s the farm work necessarily became more professional, with workers having to meet minimal standards and throughput compared to the old piece-rate system where they simply got paid for what they harvested/planted.  This, and cultural changes where local people no longer appear to want this type of work, meant that the farmers increasingly had to look overseas to fill the workforce void.

Introduced post Second World War, the UK’s Seasonal Agricultural Worker Scheme (SAWS) went through many iterations.  In the early 2000s SAWS was open to workers from non-EU countries to work for up-to six months in the UK - with Ukraine, Russia and Belarus and Bulgaria taking a significant proportion of the approximate 20,000 annual SAWS permits.

With the accession of Bulgaria and Romania to the EU in 2007 the SAWS scheme was restricted to workers from these countries from 2008 and the scheme eventually scrapped in 2013 as post-accession worker restrictions on Bulgarian and Romanians came to an end.

Bulgarian and Romanian workers remain fundamental to the sector, accounting for an estimated 60% of Scotland’s seasonal migrant workforce in 2017, with a further 18% from Poland. After accounting for movements between farms within Scotland, we estimated that there were 9,257 seasonal migrant workers engaged in Scottish agriculture in 2017.  A significant majority engaged in the East Coast soft fruit sector during the summer months, with peak labour use in the June to August period.

A proportion of the migrant workforce is highly mobile, moving between farms and regions in line with peak harvest seasons.  Whilst naturally, the soft fruit sector is highly seasonal the length of the growing season continues to expand, driven by technological and plant breeding advances, the use of polytunnels and diversification of the types of fruit grown.  Our study found that, on average, workers were employed for just over four months per year, but 36% of the workforce worked for less than 2 months, 38% for between 3 and 5 months, and 26% more than 6 months in a given season.

After accounting for movements between farms within Scotland, we estimated that there were 9,257 seasonal migrant workers engaged in Scottish agriculture in 2017

The prevalence of workers from different countries reflects the economic performance of workers’ home countries relative to Scotland. Our study highlighted that the key motivations for foreign workers choosing to work on Scottish farms were: (i) earnings potential linked to enhanced quality of life and goals; (ii) conditions of work relative to home countries; and (iii) familiarity, recommendations and farm reputations.

The best workers develop skills over multiple seasons and this means that Scottish farmers work hard to retain good seasonal employees year after year.  Indeed, returnees are regularly relied on to provide an experienced core of employees to spread across worker teams meaning they often become keystone workers – helping manage and run the farm businesses.

Our study estimated that around half of Scotland’s seasonal migrant agricultural workforce were returnees in 2017, with the remainder being sourced through: (i) recruitment agencies (18%); (ii) informal ‘friends and family’ networks of existing staff (13%); and (iii) direct recruitment by the farms (10%).  In addition, during peak work periods labour providers are often contracted to supply workers on a more flexible and immediate basis, something more commonplace in the field vegetable and potato sector compared to the fruit sector.

Significant growth in statutory minimum wages in Bulgaria and Romania has occurred in the last decade with minimum monthly wages in Bulgaria rising from £61 in 2007 to £231 in 2017 with an increase from £77 to £362 in Romania over the same period. This means that wage motives for leaving these countries for work remain strong.

More generally, improvements in Eastern European economic performance has led to a general shortage of seasonal farm workers across much of Europe (e.g. Germany, Ireland, Spain, etc.).  However, the situation in Scotland, and the rest of the UK, has been exacerbated by the weaknesses of Sterling since the Brexit vote.  This means that the effective take home wage for Eastern Europeans working in the UK has fallen since 2015.

Thinking on these terms, it is therefore unsurprising recruitment challenges exist across the UK’s horticulture sector that have left the industry demanding workers from outside the EU be let into the UK, amidst estimates of 10% to 20% worker shortages.

Whilst it may be easy to point the finger at Brexit for worker shortages that the sector is currently faced with, this research has shown that it is only a contributory factor.  The last two years have seen some farmers having to leave a proportion of their crops unharvested due to a shortage of seasonal workers and press headlines on the topic have been ever present during 2018.

Such examples abound in 2018 with a consistent and clear message – a proportion of the younger Eastern European workers are not returning and recruiting new workers is increasingly challenging and expensive and has led to greater recruitment of a less productive, older, workforce with poorer English language skills in 2018.

One of the factors affecting current recruitment challenges is the improved performance of many Eastern European economies in recent times, which has led to falling unemployment rates  including, importantly, youth unemployment levels.

It is against this backdrop that the Home Secretary, Sajid Javid, recently announced a pilot scheme to bring migrant workers from outside the EU to UK farms. The pilot SAWS will allow farmers to bring workers to the UK for up to 6 months. You can find our analysis of the pilot seasonal agricultural workers scheme here. Whilst the UK Government’s August announcement of a limited pilot SAWS, and the publication of the latest Migrant Advisory Committee report, are a step in the right direction, they will have done little to alleviate industry concerns.

These are unprecedented times.  Whilst politicians and Government continue to debate, negotiate and posture over our future relationships with the EU and wider world on immigration and trade matters, businesses across Scotland’s agri-food sector are operating in an information vacuum, with no clarity on next year’s post-Brexit labour supply.

Agriculture production cycles are not easily turned on and off, and if horticultural crops are to be planted next year, the farmers need signals that they will be able to harvest their crops thereby allowing the sector to continue to thrive and flourish. Our research into seasonal migrant labour in Scottish agriculture highlighted some unpalatable findings from the farmers when they were asked what they would do if they did not have access to foreign seasonal workers.

University of the Highlands and Islands