The economic cost of animal disease: Winners and losers from Johne’s disease 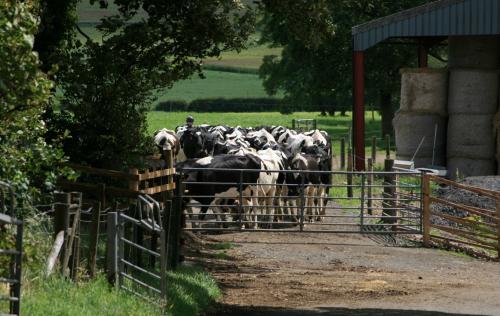 SEFARI scientists, in collaboration with other research partners, provide evidence which informs the Scottish Government about the economic consequences of animal diseases. Our multi-disciplinary approach uses a mathematical and economic model to explore the winners and losers of Johne’s disease in the Scottish dairy herd. Our results indicate the extent to which both farmers of dairy herds infected with Johne’s and milk consumers, lose out as a result of the disease, while farmers of uninfected herds benefit. Our research supports policy decision-making, when evaluating economy-wide trade-offs between stakeholders affected by livestock diseases.

Johne’s disease is a contagious bacterial infection in cattle caused by paratuberculosis, which affects the productivity and profitability of affected farms. A key challenge with Johne’s is that calves are most vulnerable to becoming infected but do not show signs of the disease until two to five years of age.  This means that the disease is often not detected until years after the initial infection.  Also, Johne’s is difficult to control and there is currently no cure for the disease.  Instead, the Scottish Government advises farmers to implement biosecurity measures to prevent and control the infection.

The Scottish Government’s Animal Health and Welfare Strategy is committed to maximising the benefits of animal health and welfare and therefore supports understanding the economic costs associated with animal disease outbreaks.  Johne’s disease is endemic in the UK but there is no estimate of its cost to society in Scotland.  We work alongside and in close collaboration with EPIC, the Scottish Government-funded Centre of Expertise on Animal Disease Outbreaks, to support the delivery of evidence identifying the economic cost of animal disease in Scotland. By looking at disease dynamics and economics together we can provide a more complete picture as to the winners and losers of endemic disease, which can better support policy decision-making and ultimately society.

Using a multi-disciplinary modelling framework, we calculated the changes in economic welfare, after a year, associated with the presence of Johne’s disease in Scotland for a dairy farm with infected herds or uninfected herds, and milk consumers.  A mathematical model simulated the spread of Johne’s and an economic model estimated market-level impacts of Johne’s assuming increased production costs for farmers of infected herds and higher milk prices.  Our results suggest an overall loss of £1.61 million per year for Scotland associated with Johne’s disease in the national dairy herd.  Milk consumers experience the largest economic loss (-£2.82 million per year) from Johne’s disease, and farmers of uninfected herds gain more (£2.35 million per year), from inflated milk prices and avoided costs of disease, than famers of diseased herds lose (-£1.14 million per year).  This finding challenges the traditional view that industry benefits and should therefore pay for endemic disease prevention and control without the need for public policy intervention.  An infected farmer’s loss per animal (£37.01 per infected cow per year) is two times larger in magnitude than that of an uninfected farmer’s gain (£16.23 per uninfected cow per year).  Our results suggest that a Johne’s eradication scheme could favour milk consumers and farmers of infected herds in Scotland, who experience an economic loss as a result of the disease.

Our modelling of Johne’s disease has provided insights into the winners and losers of Johne’s disease, which has informed the Scottish Government.  The modelling framework developed is being used to evaluate other endemic and exotic livestock diseases to inform future animal health and welfare policies.

SEFARI scientists are delivering evidence to inform the Scottish Government’s Animal Health and Welfare Strategy.  The evaluation of economic consequences of livestock diseases is particularly important from a policy, public good, cost sharing, and human health perspective.  The modelling framework developed in this research can be applied to other livestock diseases to explore the relative economic impact of outbreaks to society that are often not considered, in addition to the impacts on farmers.