How can we safeguard biodiversity through values and governance?

How can we safeguard biodiversity through values and governance? 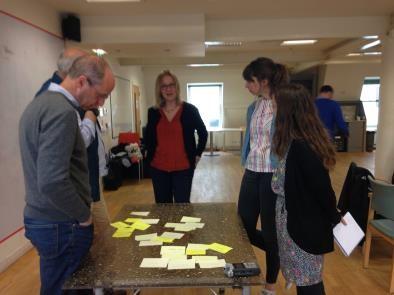 Despite many initiatives to safeguard biodiversity, recent analyses and reports show that biodiversity continues to decline at the global level.

To change this situation requires appropriate governance mechanisms. Governance is the process of making and applying rules and procedures that (seek to) influence motivations and behaviours. As such, biodiversity governance can be seen as a reflection of particular sets of values that determine what to conserve and where, what to regard as acceptable ways of using and managing land and biodiversity, and how to frame and negotiate trade-offs.

In two workshops we investigated which values are most relevant in relation to protecting biodiversity in Scotland and what characterizes good governance mechanisms.

Biodiversity has for many years been high on the agenda of policy makers, environmental organisations and many citizens.

As a consequence, many different initiatives have been launched to try to safeguard vulnerable species and habitats and promote the recovery of those that have declined. While there have been success stories in the form of the recovery of habitats and species, the most recent report by the Intergovernmental Science-Policy Platform on Biodiversity and Ecosystem Services (IPBES) highlights that biodiversity remains in a state of crisis.

Any attempt to promote biodiversity will inevitably reflect particular sets of values. Values play a role in relation to determining what to conserve and where, what to regard as acceptable ways of using and managing land and biodiversity, and how to frame and negotiate trade-offs (between different land uses, species & ecosystems, and groups of people in society). Values are also important in relation to the ways in which to motivate stakeholders to engage in particular land management practices, and how to evaluate the virtues of different approaches to biodiversity governance. Biodiversity governance can therefore in many ways be seen as a question of what values and whose values are brought to bear on the use and management of the environment and will therefore also have important implications in relation to environmental justice.

In order to better understand which values can be used to promote biodiversity and what characterizes good governance mechanisms we conducted two workshops with professionals working with biodiversity. The two workshops were conducted in Edinburgh in February and June 2018 with four participants each.

The workshop participants discussed how different sets of values appeal to different people and hence need to be considered. Values where described to participants as guiding principles that shape our attitudes and actions. Based on the work of social psychologist, Shalom Swartz, values can be placed into four different value groups (these being self-transcendence, conservation, self-enhancement and openness to change) and arranged based on a proximity basis, meaning that people are more likely to place similar emphasis at the same time on values the closer they are to each other.

Results show that while, for example, values such as benevolence seem a natural fit with the motivations for conservation, other values such as security, conformity, achievement, power, and hedonism may also play a relevant role for some individuals depending on how conservation is framed.

Participants also highlighted how values within their organisations underpin and influence what decisions are made.

In terms of key desirable governance characteristics, workshop participant’s highlighted engagement with different stakeholders, inclusivity, ease of monitoring and evaluation, being joined up and collaborative as well as other aspects related to effectiveness and efficiency, including adaptability. In this sense, mechanisms such as partnerships and other forms of collective action were generally recognised as ‘good’ governance mechanisms when evaluated against these criteria.

Participants also discussed the characteristics and values of existing governance mechanisms. In general, most current governance mechanisms, such as regulations and subsidies, appeal mainly to values related to self-enhancement and tradition in the sense of maintaining things as they are. They tend to emphasise economic impacts on land managers, ease of implementation and the ability to quantify implementation if not outcomes. However, the level of precision required in the implementation of measures often leads to anxiety among land managers which undermines trust relationships.

Participants highlighted the need for a people-centered approach to biodiversity governance that can promote human connections with nature. That is one that nurtures relationships between all stakeholders, encourages dialogue and trust and recognises different values, uses, needs and motivations.

The workshops showed how approaches to promoting biodiversity conservation could be changed to appeal to a broader set of values and hence to more people than what is currently the case.

Currently, only a narrow set of values and characteristics are emphasized by most current governance approaches and these are not the ones that are most closely aligned with the promotion biodiversity.

The results also showed that notions of fairness, equity and participation are recognised as key characteristics of ‘good governance’ but they often fall out of formal governance processes and structures.

Overall, these findings suggest that understanding these complex relationships can provide the basis for governance designs rooted in the value base of the stakeholders involved.