High and dry - Drought resilience in alpine vegetation and soils 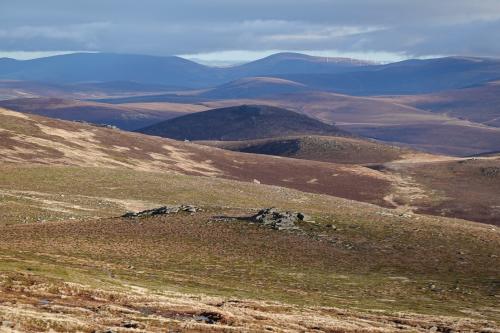 The alpine zone supports some of our most natural habitats and provides ecosystem services including carbon storage, nutrient cycling and water quality.

Climate change is reducing snow cover duration and is predicted to lead to prolonged droughts in summer. Some alpine habitats are adapted to experiencing frequent drought periods while others typically have wet soils year-round. It is likely that these habitats will respond differently to scenarios of increasing drought and their differing responses will impact on the ecosystem services that we derive from them.

The alpine zone (the area above the tree line) contains some of our most natural habitats and supports a unique range of biodiversity. Along with moorland habitats, the alpine zone provides 70% of UK water resources and contains 40% of the UK soil carbon stock. The alpine zone is characterised by a mosaic of habitats dominated by dwarf-shrubs, grasses, mosses and lichens. Each habitat experiences a different climate, varying according to elevation, wind exposure, air temperature, snow cover duration, and soil moisture.

Scotland’s climate is changing. In the Cairngorm mountains, snow cover duration decreased by 53 days between 1970 and 2004 and is predicted to decline further. In addition, a reduction in summer rainfall is predicted. The combination of reduced irrigation from melting snow, reduced summer rainfall, and warmer temperatures is likely to lead to more frequent and more severe droughts in alpine areas. Drought can reduce plant growth and the activities of organisms living in the soil. This in turn may affect carbon and nutrient cycling and could alter the ability of ecosystems to sequester carbon, compromise stability of existing soil carbon stocks, and influence losses of carbon and nutrients into soil water.

Since alpine habitats are adapted to a range of different water availabilities, from those continuously irrigated by melt water to those which experience frequent dry spells, they may differ in their resilience to drought. Understanding these differences is important for predicting how climate change could impact on biodiversity and ecosystem services in the alpine zone.

These three habitats represent a gradient of exposed to sheltered and dry to wet conditions, and we expected them to respond differently to drought.

We kept the mesocosms in a controlled environment where we could measure CO2 fluxes and losses of carbon and nutrients in water draining from the soil, and then exposed them to droughts of one to four weeks duration.

We found that the three habitats differed in their responses to drought.

Despite these different responses, net sequestration of carbon was resilient to drought in all three habitats. The soil in Nardus grassland lost more water during drought than other habitats and took longer to recover its water content when the drought was stopped. When watering of the grassland restarted after a two- or four-weeks drought much of the water was not retained by the vegetation or soil and passed straight through the mesocosms. This could be because the soil had become hydrophobic (water repelling) as it dried, or because the drought caused cracks to open in the soil, allowing water to pass through more rapidly. In contrast, the moss dominated Racomitrium heath retained almost all water applied after droughting and rapidly regained water content.

For all the habitats we found that droughts caused pulses of nitrate to be released into the soil water but reduced the amount of dissolved carbon released. Nitrate is an important nutrient for plants and algae and high levels of nitrate in surface water indicate a reduction in water quality and can encourage algal growth.

Our research shows that alpine habitats have contrasting responses to drought and while these ecosystems themselves were resilient to droughts of up to four weeks duration, the effects of drought could have implications for areas downslope, including reduction in water quality, and increased run off if heavy rain follows drought periods.

Racomitrium heath, which occupies exposed locations where it experiences frequent drought, responds rapidly to drying by reducing plant activity, but recovers its activity quickly when rain falls. In contrast, in Nardus grassland, which occupies locations where it is irrigated by snowmelt, plants remained active throughout the drought. Continued water use by the plants led to greater drying of the soil and after four weeks this reduced the ability of the soil to retain water when rain fell, either because the soil had become hydrophobic or due to soil cracking. This could lead to increased run off from this habitat, particularly if heavy rain events follow drought. At the landscape scale, these habitat differences may have implications for the ability of mountain areas to retain water when rain falls following drought, particularly in high intensity rainfall events, with moss carpets being more effective than grasslands at retaining water. It is therefore of concern that in southerly mountain areas of the UK, large areas of moss dominated Racomitrium heath have been replaced by Nardus grassland due to nitrogen pollution and excessive grazing pressure, as this could reduce the retention of water in these areas and potentially exacerbate flooding issues.

We also observed pulses of nitrate in soil water following drought periods and this has implications for water quality in streams and rivers draining from alpine areas. Many aquatic biota including fish and invertebrates are sensitive to elevated nitrate levels, which can reduce growth and increase mortality, particularly during their juvenile stages. Nitrate also contributes to eutrophication of surface waters (increased nutrient availability) which increases the likelihood of algal blooms.

In summary, alpine habitats have contrasting responses to drought which affect not only the functioning of the habitats themselves, but also have potential to affect downstream water users in terms of the quality and quantity of surface waters draining from alpine areas. The contrasting responses of alpine habitats will need to be taken into consideration when projecting how climate change will impact on the ecosystem services derived from these habitats and we also need to consider how our management of alpine habitats might be influencing ecosystem service provision by changing the relative extent of different habitats.