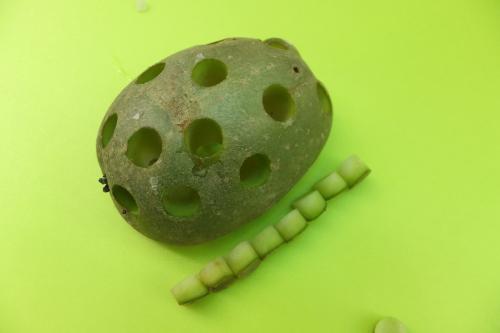 Potato is the number one wasted household food by weight, estimated at over 700,000 tonnes and with a cost of £555M per annum in the UK. Nearly half of the fresh potatoes bought by UK householders are thrown away. Working with collaborators from industry and academia we have investigated ways to improve potato storage to minimise waste.

In particular, we have started to understand the genetic basis of tuber greening which will support breeding of improved varieties. We have also identified shorter term solutions to tuber greening by showing that some wavelengths of light can actually reduce greening.

In the UK, potatoes are one of the products most wasted in the home, with an estimated 700,000 tonnes wasted annually. Householders cited ‘not used in time’ as the single largest cause of this waste, resulting in tuber greening, rots, moulds and sprouting. Greening of potato tubers also occurs throughout the potato supply chain, from field to store, and sensitivity of tubers to light is the most important component in this response.

Despite these losses, current advice from the UK Food Standards Agency is to store raw potatoes in the home in a dark, cool place at temperatures above 6 oC, and not to store raw potatoes in the refrigerator if the intention is to cook them at high temperatures, such as by roasting or frying. Storage at low temperature leads to the accumulation of reducing sugars. Subsequent reactions of reducing sugars with the amino acid asparagine (both naturally occurring in foods) during high temperature processing leads to the formation of acrylamide which at high concentrations acts as a neurotoxin and potential carcinogen.  However, storing in the refrigerator would extend shelf-life by delaying the formation of rots and moulds and reducing sprouting, thereby reducing waste.

In our research we aimed to support approaches in reducing potato waste. In collaboration with the Potato Industry, academic groups, and other end users we sought to understand the biochemistry and genetics of potato tuber greening. Through this greater understanding we hope, in the longer term, to produce varieties with a lower tendency to go green and also provide shorter term practical solutions in reducing waste.

Potato tubers of two common varieties (King Edward and Nectar) were obtained from four independent sources and were sampled from commercial store conditions on three occasions between November 2018 and May 2019. Tuber reducing sugar contents were assessed under conditions that mimicked home storage, at either 18oC (representing a cool dark place) or 5oC (representing refrigerator storage), over a 15-day treatment period. Our data clearly showed that the premise that home storing potato tubers at 5 0C post-purchase increases levels of reducing sugars and therefore acrylamide forming potential is not supported. We have presented these data to the Food Standards Agency Committee on Toxicity of Chemicals in Food.

Furthermore, storage at 5oC resulted in a significant reduction in tuber sprouting compared with storage at 18oC, indicative of a longer shelf-life.

Figure: Impact of home storage temperature on potato sprouting. Tubers of King Edward or Nectar varieties were stored at 5 or 18 oC in the dark for 15 days.

Using unique genetic and genomic tools developed in potato, we carried out experiments to understand why some potato varieties green much more readily than others. We showed that for commercial potato types, tuber greening is under the control of several genes. We have developed a prototype model to predict greening which is being assessed in a commercial breeding programme.

Co-funding was provided by WRAP, the Agriculture and Horticulture Development Board, the UK Food Standards Agency, Albert Bartlett, Greenvale AP, Branston and Morrisons and Innovate UK.