Agriculture and Food Production: Measures for a Just Transition

Agriculture and Food Production: Measures for a Just Transition 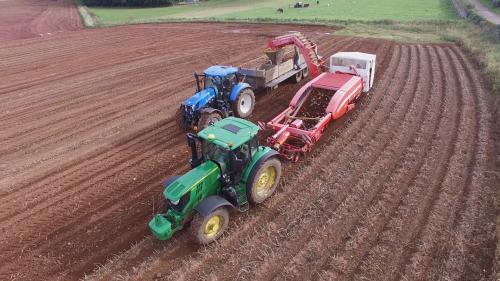 Agriculture and food production contribute a large portion of the greenhouse gas (GHG) emissions, account for approximately 20% of the world's total emissions. In Scotland, the picture is no different, where they contribute around a quarter of the total GHG emissions. Hence, it is important to address the transitions needed in these sectors in order to tackle climate change.

In this blog, Iasmim discusses a number of measures that have been recently proposed, or implemented, to help agriculture and food production to be more sustainable. A transition of practices needs to be just for everyone, and Iasmim considers both the opportunities and challenges ahead for this sector.

Alongside other activities, agriculture and food production are associated with the major pollutant gases, namely CO2 (carbon dioxide), CH4 (methane) and N2O (nitrous oxide). Unsustainable practices increase emissions and can have a direct impact on the functioning and health of our ecosystems. In Scotland, for example, changes in temperature and rainfall have already been observed, and farming businesses and landscapes shaped by agriculture are already being affected by the impact of unseasonable weather, floods and prolonged droughts.

To minimise and adapt to the impacts of climate change, governments have established GHG emissions reduction targets and implemented actions with those affected. The Scottish Government has set a target date for net zero emissions of all GHGs by 2045 and a 75% reduction in emissions by 2030.

Scotland's targets are ambitious and require quick action. On one hand, we have already demonstrated significant progress in reducing emissions (e.g., 45.4% less CO2 emissions between 1990 and 2018). However on the other, and like other countries, Scotland faces the challenge of maintaining/increasing the pace of this reduction because between 2017 and 2018, for example, there was still a 1.5% increase in GHG emissions.

Therefore, the Scottish Government is working with scientific forecasts to accelerate the pace of reducing GHG emissions. Agriculture, for example, still needs to be four times faster than historical reductions. Success will require a considerable transition of agricultural practices and food production, and we’ll need to ensure that this transition process is just for everyone in order to both promote the health of the environment and the well-being of the population. While it is a challenging process, there are several opportunities to help with this transition.

Opportunities for transition in agriculture and food production

The Climate Change (Emissions Reduction Targets) (Scotland) Act 2019 provide the principles of a just transition in different sectors, which includes agriculture and food production. A Just Transition Commission was established in the same year to ensure that the process of change is carried out in partnership with those who are impacted the most, such as rural communities, farmers and workers.

As part of this collective action, Scotland promoted its first Citizens' Assembly focused on climate change. The Assembly brought together more than 100 citizens from across Scotland to deliberate action on the issue, resulting in 81 recommendations. Among them was that the government should work with the farming community to develop a subsidy regime that encourages farmers to transition to more sustainable land management practices, and this is to be fully implemented in the next 5 years. These approaches reinforce the importance of people, industry and policy working together in the transition process.

At SEFARI we also know we can learn from others and in 2019, SEFARI researcher, Annabel Pinker (James Hutton Institute) undertook a Gateway Fellowship with the Just Transition Commission. Her work resulted in a report on the interventions governments have made in other countries that seek to manage or minimize the impacts caused by structural changes when trying to achieve a carbon neutral economy. Although the report doesn't incorporate transitions in agriculture, it does present evidence on how a just process may be promoted and this could help to underpin ongoing actions by the Scottish Government.