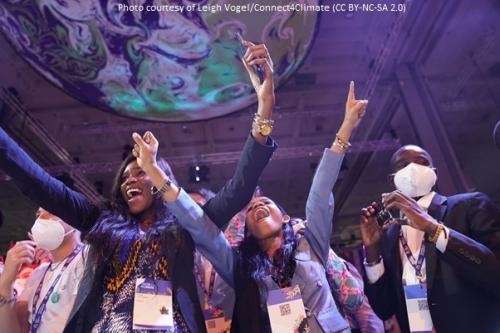 The climate crisis is a problem of global significance and not everyone has the privilege of accessing resources, or having their voices heard. This includes those for whom climate change will impact the greatest – future generations, as often the views of experts and policy makers seem to be given preference over those of the youth.

The main youth conferences in association with COP26 were the Youth4Climate conference (hosted in Milan at the end of September 2021) and Coy16 – the 16th annual UN Climate Change Conference of Youth (hosted in Glasgow at the end of October 2021). Both events saw youth climate leaders from over 150 different countries meet to discuss climate issues, producing manifestos (found here and here respectively) which outlined their expectations for world leaders and policy makers.

The need for a very low climate change target was being discussed around 2013, with the scientist James Hansen urging the adoption of a 1°C limit. However by 2015, which saw COP21 held in Paris, delegates were still only discussing the aim of keeping global warming between 1.5 and 2.0 degrees.

But the younger generations (as well as minority groups) had recognised the urgency of the issue long before. When, during UN climate talks in Copenhagen (around the timing of COP15), the Caribbean Youth Environment Network, along with partnered organisations, first launched a campaign known as “1.5 to stay alive”. This campaign introduced the world to the idea of limiting global warming to below 1.5 degrees. A clear example of future generations calling for action, long before it has become mainstream climate discourse.

Therefore, unsurprisingly, a key statement from the 2021 Youth4Climate manifesto was to request that all countries take immediate action to stop temperatures rising above 1.5 degrees – a clear call for action. The attention drawn to this issue resulted in Alok Sharma (the president of COP26) addressing its importance in a speech he delivered at the end of the youth conference.

“And there is no doubt that this group of young people and, in fact, young people around the world, are going to hold this set of world leaders to account if at COP26 we are not able to credibly say we have kept 1.5 degrees within the reach. Of that I am absolutely certain.” – Alok Sharma, (his full speech can be found here).

Following this youth conference, COP26 saw a large amount of attention directed to addressing the 1.5 degrees global warming issue, likely influenced by the sustained pressure applied by youth groups, the wider public and backed by the well-established climate science evidence base.

“We are calling on all countries to update their NDCs (Nationally Determined Contribution) so that they are in line with holding temperature rise to 1.5 degrees.” - an official statement on the COP26 website that can be found here.

A number of other issues that were highlighted by either the Youth4Climate conference or COY16, can also be directly traced to discussions or outcomes made during COP26. For example, making electric vehicles more accessible was highlighted in the COY16 statement:

‘We call for a redesign of our communities and transportation towards clean and renewable public transport and electric vehicles, in order to be more walkable, bikeable, and accessible.’

COP26 produced a declaration on accelerating the transition to 100% zero emission cars and vans, with the aim of working towards all sales of new cars and vans being zero emission by 2035 in leading markets, as well as emphasising the importance of these vehicles being accessible and affordable.

Another key message from the Youth4Climate manifesto was to ensure universal climate change education and climate literacy, and the COP26 conference produced a 10 year work programme on Action for Climate Empowerment to promote climate education.

Furthermore, YOUNGO, the Official Children’s and Youth constituency of the UNFCCC, organised a day (on the 5th of November 2021) which focussed the views and opinions of younger generations being directly heard by decision makers within COP26. Many of the outcomes of this day were centred around climate education and a Primary Science Model Curriculum (the introduction of conservation skills to primary school children), as well as an £85,000 grant to better meet the education needs of refugee children, was announced by the UK Government. There are also ongoing pledges such as ‘learn for our planet: act for the climate’ – ensuring countries revisit this issue before COP27.

Through action at local, national and international level, such as Greta Thunberg’s “School Strike for Climate" initiative, the voices of younger generations are having an impact on decisions regarding the climate crisis. However, it is also clear to see they can be ahead of the game, and this highlights just how important youth engagement on climate change is.

The clear sense of urgency and resounding message from the youth, and enshrined at these conferences that change is required, may have influenced some decisions at COP26. However, although promises were made, the COP26 conference seems to have fallen short of ensuring the action the younger generation really want and needs. Even though some undoubted and crucial progress was made, the COP26 conference came and went without truly achieving the necessary requirements to stay within the 1.5 0C limit. Additionally, it will not be until 2023 that we see the $100 billion per year from developed countries given to developing countries which was agreed in 2009, furthering the lack of climate change resources available in disadvantaged countries. Many were also disappointed with the decisions made by some nations, such as the choice to ‘phase down’ the use of coal rather than totally ‘phasing it out’, resulting in a complete change to the mandate of cutting coal in the final hours of the COP26 conference.

At SEFARI we know it is important to engage with everyone on the climate change emergency, to achieve a ‘Just Transition’, and this especially includes the next generation, those that ultimately inherit, and are rightly angry about, the consequences of decisions (and sometimes lack of decisions) made in their name now.

In the context of COP26, SEFARI Gateway, along with SEFARI partners, was privileged to have a stand at the Macaulay Lecture. This annual event, organised by the Macaulay Trust and the James Hutton Institute, brought together a number of guest speakers debating the pace and scale of climate action. This time the event, chaired by BBC Broadcast Journalist Laura Goodwin, placed youth representatives (youth activists Anuna De Wever, Lola Segers and Julieta Martinez) on the same platform as experts and politicians such as Christina Figueres, and First Minister Nicola Sturgeon. In particular, discussions enabled panellists and the audience to hear, share and consider many of the wider social injustice and interconnectivity obstacles which surround climate change, and shouldn’t be overlooked.

As well as involving and placing the insight of the youth to the fore, SEFARI are passionate about improving climate education. Through, for example, our involvement in science festivals, producing educational resources , broadening access to research, and providing hundreds of PhD opportunities each year (available at BioSS, the James Hutton Institute, Moredun Research Institute, the Rowett Institute, RBGE and SRUC).

Climate change is an issue that will significantly affect the younger generations, therefore the vital contributions they are making needs continued recognition, encouragement and support.  COP26 may have ended some months ago now, but the need for climate action has definitely not.

By Catrin Pilkington, who was recently on work placement with SEFARI Gateway and is pursuing her MSc in Science Communication and Public Engagement at the University of Edinburgh.