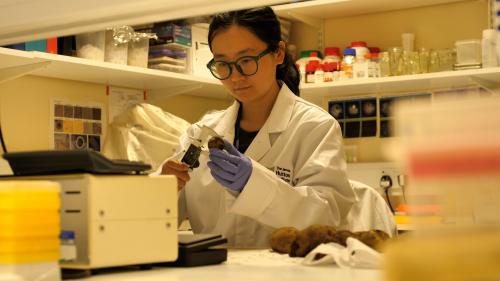 Here at SEFARI, we take pride in our partner institutes and their outstanding achievements in research and informing policy. We firmly believe that inequality in the sustainability sector must be addressed and are committed to using our platforms to showcase and commend remarkable women at all stages of their careers. Read on to celebrate the accomplishments of some of the outstanding SEFARI women.

Scientific Director of the Moredun Research Institute and CEO of the Moredun Group, Professor Julie Fitzpatrick OBE, has been appointed as the new Chief Scientific Advisor for Scotland. This exciting appointment, announced in June 2021, comes after an already impressive career for Professor Fitzpatrick, including an OBE for Services to Animal Research and Medicine awarded in 2014. In this new role, Professor Fitzpatrick will be able to use her expertise to ensure that science is considered in relevant policy developments.

Dr Eulyn Pagaling, Environmental Microbiologist at the James Hutton Institute was recently awarded the SEFARI Gateway ThinkTank project entitled “The transport, fate and impact of pharmaceuticals in the environment in Scotland” in 2020. The project was established to understand the level of risk of pharmaceuticals found in the environment due to their use and subsequent release into in the Scottish environment. This came after an impressive early career, including discovering new viruses that could infect a bacterial species found in Chinese salt lakes, and time spent in Hawaii working on various microbiology projects in both natural and engineered environments.

Microscopy Lab Manager at the Royal Botanic Garden Edinburgh (RBGE), Frieda Christie recently retired after an astonishing 28-year career at the RBGE. Frieda Christie’s extensive career saw her win multiple awards, including 1st Prize in the Novartis/Daily Telegraph Images in Science Competition in the ‘Science as Art’ category. She was celebrated in a feature on the RBGE’s Botanics Stories page, which included some of her incredible microscope images.

In June 2020, Dr Madalina Neacsu, Research Fellow at the Rowett Institute, was announced as the winner of the University of Aberdeen’s Principal's Excellence Award for Public Engagement with Research, for her knowledge exchange work highlighting the importance of consuming plant-based foods. Dr Neacsu’s research focuses on functional food formulation and establishing novel crops to increase food security, biodiversity and promote healthier food habits. She has also recently been involved in a COP26 event, Encampment of Eternal Hope, discussing concepts of how climate action can be taken through the food we eat and produce.

Dr Joanne Conington of Scotland’s Rural College (SRUC) has been recognised by the European Federation of Animal Science for her contributions to the livestock sector. The Head of the Department of Agriculture, Horticulture and Engineering Sciences at SRUC’s Central Faculty was announced as the recipient of the Distinguished Service Award in April 2021.

Dr Altea Lorenzo-Arribas, Socio-Economic Statistician at Biomathematics & Statistics Scotland (BioSS) recently presented at the 2021 Royal Statistical Society International Conference, highlighting the impact of Women in Statistics Through History. She is also active in the diversity and inclusion space, organising the Royal Statistical Society International Women’s Day in both 2019 and 2021 and publishing an article on women, power, and scientific collaboration.

These amazing scientists are an incredible showcase of the excellence demonstrated by SEFARI women. But this list is by no means exhaustive. For example, Professor Jennie Macdiarmid is sharing information on effective ways to reduce your carbon footprint in the way you eat and Professor Leslie Torrance is conducting research into food security in East Africa. Click through some of the links below to learn more about the interesting work that SEFARI women are involved in and how they are contributing solutions to the big issues we’re facing.

Please also read about how our ongoing research is contributing to climate and environmental issues at: https://sefari.scot/climate-and-the-environment

By Krishna Sharma, who is currently on work placement with SEFARI Gateway and is pursuing her MSc in Science Communication and Public Engagement MSc at University of Edinburgh