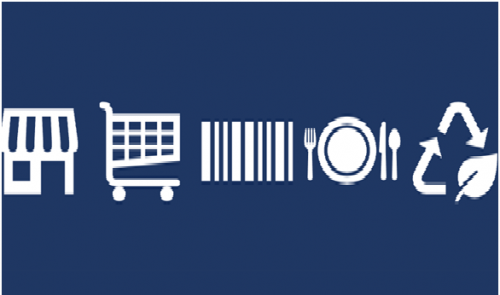 In this blog, Aiden Berri and Luiza Toma discuss how their research has found consumers’ intentions to use a SSM are influenced by a variety of factors which combine their food insecurity and food waste attitudes.

The Scottish Government has set a flagship target to reduce food and drink waste by 33% by 2025 from a 2013 baseline, which recorded an estimated 1.35 million tonnes of food and drink waste in Scotland. One way to reduce food waste is through food redistribution, making surplus food that could go to waste available for human consumption or as animal feed. Food redistribution exists near the top of the food waste hierarchy as the most desirable option for reducing food waste, after measures to prevent surplus in the first place. Surplus food can be described as food that is edible but not sellable in mainstream markets such as food near or past its ‘best before’ date, near its ‘use by’ date, food that is overstocked, mislabelled or with damaged packaging. Food redistribution has not only economic and environmental benefits but also food security and social impacts, as food waste and food poverty are prominent societal challenges with considerable overlap.

Following the decade of austerity policies triggered by the 2008/9 global financial crash, social reforms in the UK have had detrimental effects for low-income families through the largest cuts to public finances and some of the most extensive changes to social benefits in approximately 80 years. As a result, food poverty has increased and currently, across all four UK nations (England, Wales, Northern Ireland and Scotland), between 10 – 20% of adults age 16+ are considered to be in marginal, moderate or severe food insecurity, indicating we may face a potentially significant shift in how people acquire food with a more significant role for food redistribution mechanisms.

SSM emergence can be sporadic – with the first one in the UK having opened in 2013 – and the little research done on this redistribution model has almost exclusively focused on exploratory work for their classification and mapping. There is no research, as of yet, which takes a focused look at the consumer experience of SSMs, or their feasibility in providing adequate nutrition or success in reaching their aims to help people transition out of food poverty. Similarly, little is known about the consumer demand for SSMs. Therefore, in our research study (full research paper currently under review) we have analysed an array of factors that potentially influence consumers’ intentions to use SSMs by using cross section survey data collected in 2020. Factors such as food security and/or food waste related concerns, are translated into attitudes and intentions to use SSMs if they contribute to the social and environmental sustainability of the individuals or their communities (Figure 1).

Figure 1. Behavioural determinants of consumers’ use of SSMs

Factors influencing attitudes and/or intentions to use SSMs include:

The findings are relevant for food waste reduction policies as they indicate factors potentially influencing the use of an emerging avenue for food surplus. Although more research is needed to further detangle to what extent SSMs fulfil their social and environmental sustainability goals, and what is the risk of their contributing to the normalisation of the systemic causes of food poverty and food waste.