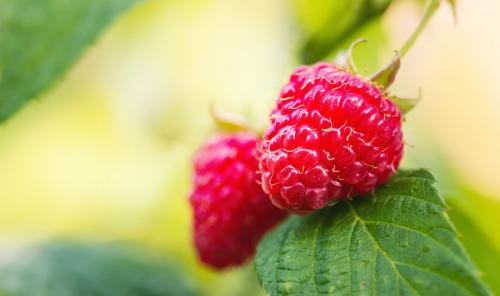 The production of soft fruit is an important commercial activity in Scotland, generating more than £115 million in income for growers in 2018. This industry is underpinned by the national (UK) collection of high health raspberry and blackcurrant varieties. These collections are propagated in biosecure glasshouses and are tested annually to guarantee that they are free from infection by particular pests and pathogens. Viruses are a major cause of disease of soft fruit plants growing in the field. In this post, we will give you a short overview of some of the research aiming to properly characterise these viruses and so develop more and better diagnostic tests that we can apply to the high health collections.

New fruit varieties of soft fruit are continually produced by breeders, who aim to develop plants with improved characteristics in line with consumer tastes and trends as well as modern growing and production systems.

A scientific programme of raspberry breeding, co-funded by the Scottish Government and AHDB, has been ongoing at the James Hutton Institute (JHI) since the 1950s and this was formalised to include input from the wider soft fruit industry in 1994. Plant breeding is research intensive and requires both staff and facilities to manage numerous lines of genetic material to produce marketable varieties.

This allied programme is underpinned by JHI’s high health plant facility (Figure 1) to maintain and supply certified, pathogen-tested soft fruit plants for multiplication by licensed propagators. Some propagators sell the fruit directly into the supermarket chain or they may supply the multiplied plants to growers and farmers, whose produce ultimately lands in the hands of the consumer.

The JHI facility is the sole UK establishment with the expertise and facilities to produce pathogen tested stock and ensures that the Scottish and UK soft fruit industry has access to clean planting material for sustainable cropping. To qualify for certification at the highest health grade, plants in JHI’s high health collection must be shown to be free from a specified list of viruses, root rot phytophthora and several phytoplasmas (which are specialised forms of bacteria). These lists include historically important viruses but also virus-like diseases for which the actual causative pathogen has not been identified.

So, for example, with raspberry the most recent list includes a disease called Raspberry yellow spot, for which there is currently no known cause. Testing for this sort of “disease” relies on the mechanical transfer of the disease “agent” to so-called indicator plant species and visually examining the plants for the development of symptoms.

Our research to develop diagnostic tests has concentrated on characterising at the molecular level the viruses responsible for soft fruit diseases and using the genome sequence information we have obtained to design virus-specific tests. This approach overcomes the uncertainty that often arises when a visual assessment of disease symptoms is used as the primary diagnostic approach.

For RLSV and RLMV, we were able to show that these are in fact isolates of the same virus and have developed a test that can detect both isolates simultaneously. We are currently working on a molecular test for Rubus yellow net virus (RYNV) which is more difficult. We are just beginning to understand that fragments of the DNA genome of this virus may become inserted into the raspberry plant chromosomes. We do not yet know whether such plants remain infected with the virus or whether the virus genome fragments are artefacts of historical infection. Nevertheless, it’s important that any RYNV diagnostic test adopted for use in the high health facility can differentiate between these two scenarios.

It is important to be vigilant for new virus diseases that might arise and become established. This has been the case for Raspberry leaf blotch virus (RLBV), which we were the first to identify and characterise and which has become ever more prominent in the last ten years. The reasons for the sudden emergence of RLBV are not known but are likely to be related to the growing of susceptible raspberry varieties by farmers and perhaps also an impact of changes to pesticide use and/or climate conditions on the infestation of crops by the mite that carries and spreads the virus.

JHI has an almost unique combination of research facilities, access to diverse plant resources and accumulated scientific expertise which has enabled us to make significant advances in the provision of molecular diagnostic tests for viruses of soft fruit plants. This ongoing Scottish Government-funded research programme feeds directly into the management of our high health soft fruit plant collections.