Mitigating against, and adapting to, the effects of climate change: Grasslands and Crop Genetics

Mitigating against, and adapting to, the effects of climate change: Grasslands and Crop Genetics 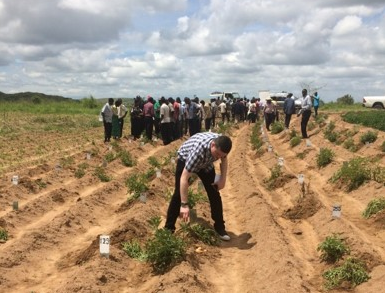 Finding ways to reduce and cope with the impact of climate change is vital to us all. In this blog, SEFARI researchers outline their ongoing work to find new ways to help; firstly, discussing how grasses have an important role in carbon sequestration and then outlining how a better understanding of crop genetics will enable us to cope with climate change and improve food security.

What are the benefits of grasslands?

Globally, grasslands represent 70% of the agricultural land area. In Scotland the figure is even higher (approximately 80%), due to the contribution from rough grazing on land less favourable for agriculture (LFA).

The potential of grasslands to promote the storage (sequestration) of carbon from the atmosphere is well-established, not least through a recognition that conversion of grassland to arable production can result in significant loss of carbon-rich organic matter and degradation of soil quality.

Grasses have dense rooting characteristics that stabilise soil structure, both directly and as a consequence of the organic material they add to soil such as dead roots, leaf litter and organic compounds continuously released from living roots (rhizodeposits). This organic matter feeds  microbial and animal life in the soil which recycle nutrients essential for plant growth.

Consequently, effective management of grasslands offers a potential “win-win” scenario, where improvements in soil health are concurrent with contributions to greenhouse gas mitigation through carbon sequestration.

What initiatives, relating to grasses, are already available?

Harnessing the potential of soil carbon sequestration is gaining momentum with the promotion of grass leys and rotations within the international “4 per thousand” initiative. Within the campaign it is highlighted that a 0.4% year-on-year increase in soil organic matter content would be sufficient to completely mitigate human inputs of carbon to the atmosphere.

Achieving this target globally is not as straight-forward as the small percentage change might suggest as it is also necessary to consider this in the context of trade-offs associated with grasslands, particularly nitrous oxide and methane emissions which are potent greenhouse gases, from intensive grazing.

Can research help us to understand and utilise the benefits of grasses?

One emerging option for the 1.3 million hectares of seeded grassland (2017 figures for Scotland), and potentially the 0.6 million hectares under annual cropping (where over-wintering cover crops could be used), is to tailor species selection for agricultural grasslands to maximise environmental benefits.

There is now increasing evidence that the grassland species is important. Different species vary considerably in the extent to which they foster increased soil carbon stocks, and the impact that they have on soil greenhouse gas emissions.

The work raises the exciting possibility of directly selecting for plant characteristics that promote environmental benefits, while also retaining hard-earned agronomic benefits in relation to grass productivity and quality.

Progress toward this aim is now supported by a trial site for grass species and mixtures at the James Hutton Institute, where impacts on soil health, greenhouse gas fluxes and soil physical properties are currently being studied.

Researching ways to reduce climate change (e.g. through carbon sequestration) is only part of the story though, we are also investigating ways to help us to be more resilient to the potential impacts that climate change may bring.

Harnessing the power of genetics

As we strive to sequester more carbon and reduce greenhouse gas emissions we must also adapt and mitigate the potential for climate change adversely affecting crops through disease, and reduced productivity.

Why is mitigating the effect of climate change on our crops so important?

Agriculture is of considerable direct and indirect importance to the Scottish economy. Barley is the major cereal crop grown in Scotland (1.8M tonnes (T) p.a.) supporting industries valued at £4.4Bn to the Scottish economy. The distilling sector is continuing to grow with the whisky industry supporting >7,000 jobs in rural Scotland. Other key crops include potatoes with 28,000Ha (farm gate value £209M) grown annually in Scotland. Additionally, the production over the past ten years of soft fruit in Scotland has increased by £66 million (137%) to an estimated £115M in 2016.

How can harnessing the power of genetics help?

New genomic/genetic approaches provide the capability to dissect and examine key traits in crop plants and will be an important tool to cope with climate change and improve food security over the next 20-30 years.

An example of how this is being done is through a database of barley yields, from Scandinavia to North Africa, linked to meteorological data. Through this work we can begin to predict the best barley varieties for future climate change scenarios. Further work with commercial breeding companies has also added to this work, and has paved the way in increasing our understanding of resistance to the disease caused by the Rhynchosporium fungus in winter barley. Furthermore, our research has also identified aspects of barley’s genetics,  important for the inheritance of root hairs that associated with nutrient (phosphorus) uptake efficiency in dry conditions.

Another example of our work involves potatoes. For most potato varieties tuber yield is highly susceptible to even moderately elevated temperatures with heat tolerant varieties important for Scottish seed exports (ca. 90K tonnes per annum) to growing markets in warm countries.  Our research has identified heat tolerant varieties and the genetic code responsible for this trait. The work is being extended via co-funding from the Global Challenge Research Fund (UKRI GCRF). In collaboration with partners in Kenya and Malawi, potato types carrying traits for heat tolerance, rapid maturity and virus resistance are being trialled in warm and dry environments, underpinning efforts to expand potato production in hot environments and mitigate potential impacts of climate change.  All of these link to maintaining yield, reducing inputs, and increasing food security for climate change mitigation.

Harnessing and sharing the knowledge from research is also being facilitated through database tools. Germinate is one such tool which provides access to both genetic and field observations of different crop varieties and is being further developed to allow developing countries access to information on varietal resilience to changing environments. Germinate will form the basis of data dissemination in collaboration with the Crop Trust pre-breeding programme on Crop Wild Relatives, providing critical information about the best crop types for breeding resilience.

Scotland has a strong history in innovation and science, with Scottish science now helping to unravel the complex issues associated with climate change and providing solutions based on sequestration, mitigation and adaptation.

Together we are developing the understanding, tools, resources and management advice needed to safeguard our future in a changing environment.