Working with growers to manage the agronomic challenges to crop production

Working with growers to manage the agronomic challenges to crop production 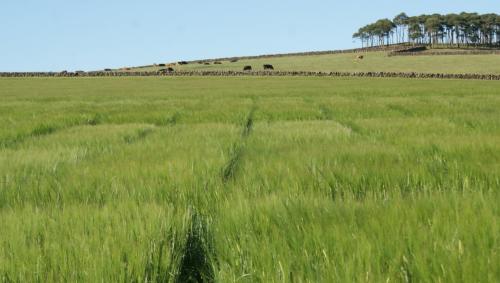 In this blog, Professor Fiona Burnett of SRUC shares her experiences of agronomy (a branch of agricultural science that deals with the study of crops and the soils in which they grow). Fiona discusses integrated and sustainable ways of producing barley with growers who are concerned about the impact that fertiliser and pesticide inputs can have on the carbon footprint of the crop.

Working with growers from across Scotland (main arable areas and remoter areas) has highlighted the very different issues that crop agronomists and growers have had to deal with recently and the decisions that go into producing a sustainable and quality crop for a quality market. In particular, events funded through the Farm Advisory Service Crop Health Activity in Islay, Shetland and East Lothian have illustrated the very different issues faced in a single crop.

The sunshine and heat of last summer in Scotland was enjoyed by many of us and meant we had the chance to enjoy being outside more, but for Scotland’s crops it was just another example of the vagaries of our climate and the environmental stresses they must endure. For farmers and their agronomists who manage these crops, the weather threw up a whole new set of problems and decisions.

How agronomists can help?

Only 8% of Scotland’s land is classed as prime arable crop land and spring barley covers the largest acreage at around 250,000 ha per annum. Nitrogen fertilsers account for half the carbon footprint of the crop – and around half of this is from the production of the fertiliser and half from emissions in the field. However, efficiencies in the fertiliser production process are helping, as are improved agronomic practices.

The spring barley crop needs less nitrogen fertiliser than the winter barley crop equivalent and best agronomic practice tailors the fertiliser input to the predicted yield of the crop, knowledge of previous cropping and the soil status.

New and improved soil tests allow for chemical, physical and biological soil health to be quantified, which also helps to maximise the efficiency of yield.

In addition, new varieties have added significantly to the yield achieved which further reduces the carbon footprint per tonne produced. Selecting the more disease resistant spring barley variety Laurette, over the previously popular but more susceptible Concerto for example, has added over 10% to the yield in trials. However, pests and diseases can erode yield potential by 15-20% and pesticide use accounts for 9% of the footprint of the crop.

It is also key agronomy decisions are targeted towards the end use for the crop - the right variety and the right quality are key in selling the crop.

As an applied plant pathologist one of my jobs is to give advice on best practice and this is backed by evidence from the Scottish Government’s Strategic Research Programme where we are working on Integrated Pest Management (IPM) strategies which reduce reliance on pesticides.

As an important part of my work I travel around Scotland to speak to growers about what their key issues are and discuss alternative ways to manage their crop agronomy.

Often early starts are part of the job, but an early flight to Islay in Summer can be spectacular as the views over the Clyde and out to the islands are amazing. Trevor Polley, SAC Consultant met me there on my last trip and we went to meet with local barley producers at Kilchoman Distillery – there are only a dozen producers on the whole island but it was great ten of them were keen to come and talk to us so we can learn from each other.

Spring barley is a crop that grows well in Scotland’s climate, enjoying long day lengths and (usually) plentiful moisture. Spring barley also carries with it the advantages of a spring crop in leaving bare stubble over the winter and reduced pest and disease pressure. But it is very vulnerable to weather stress and a hot dry start to the season can be challenging.

In Islay there is a strong link between the farmer producers and the maltster buyers, and the quality barley grown on the island has a strong local market. As such the farmers’ main concerns were about producing enough yield in the limited number of suitable fields.

It was my first experience of seeing floor malting – labour intensive in warm weather as the grain is turned every few hours and spread thinly on the malting floor.

There is a good partnership between the end user the maltster who knows and works with local producers – sustainable sources of barley where the crop agronomy has started with the best variety and used only very targeted inputs are increasingly important to buyers.

Accurate timing is crucial in maximising the efficacy and yield from fertiliser and pesticide inputs, so regular crop walking and assessment is needed. Working by calendar dates is inaccurate and regarded as poor practice.

Waste in this local malting system is minimal – draff (the remains of the malted grain after the first mash) is a high protein feed for local animals (e.g. cattle and pigs) and the residues from the distillation process itself are spread on land as a green fertilser. The use of composts and other forms of green waste are a simple and effective method of reducing the footprint from artificial inputs.

My trip to Shetland in autumn last year could not have been more different – most of the barley production is concentrated on the southernmost tip – from Sumburgh up to Sandwick.

In contrast to Islay the main use of spring barley is for animal feed, with a large portion of the crop being whole cropped rather than harvested for grain.

Straw is a very useful resource too, so varieties are selected with that in mind.

Disease and pest levels were extremely low and so the need for pesticides was much reduced and the use of composted farm yard manure is much higher in this area of mixed farming than it is in the predominantly arable areas of the mainland east coast.

While we were there we had some great debate between the local SAC Consultant Graham Fraser and Shetland AHDB monitor farmers who had been trialing different varieties and agronomic inputs.

My visits to the islands were again in stark contrast to the needs of barley growers in the main arable central and eastern belt, which was highlighted when we were in East Lothian.

Here crops are used for both feed and malting but must compete with crops produced in England or further afield.

As well as a more competitive market and demand for a very high-quality product, disease and pest pressure is more intense, so greater protection is needed.

Growers were really interested in more robust varieties with improved disease resistance and saw the win:wins in better targeting of inputs.