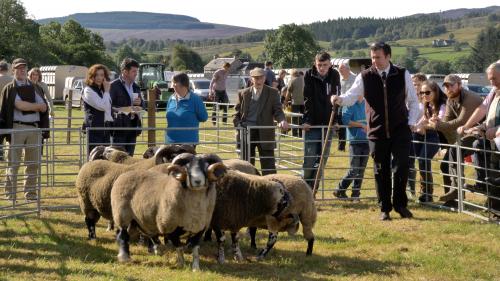 The Scottish Rural Parliament will meet in Stranraer, Dumfries and Galloway (14th - 16th November). Across the range of talks and exhibits, the theme is “Taking Action.” In the lead-up to this meeting, we are publishing two blog posts about place-based rural policy. The first of these is written by Andrew Copus, James Hutton Institute and Jane Atterton, the Rural Policy Centre, SRUC, who start off by explaining what exactly is place based rural policy.

The term “place-based” is often bandied about in a rural policy context these days. As with all fashionable terminology, it tends to mean different things to different people. In recent Scottish policy documents, it is often used to describe coordination between different policy actors, within a specific geographical area.

Probably the best example of this is Community Planning Partnerships (CPPs), which were originally set up after the 2007 Concordat between the Scottish Government and COSLA, and recently revised under the Community Empowerment (Scotland) Act 2015. The CPPs were, in part, a response to repeated criticism of the policy landscape in Scotland as complex and crowded – with a profusion of different actors, each with different geographical structures, and too often controlled from headquarters in the Central Belt. In this context, CPPs promote strategic coherence between public sector actors within each of the Council Areas, and require the engagement of communities, and in doing so reflect local needs and potentials.

In an academic context, most rural and regional development analysts would be aware that the term “place-based” owes its origin to a debate which took place within the context of European Cohesion (regional) policy during the first decade of this century. The two key protagonists in the debate were the Belgian Andre Sapir, who is associated with the concept of “spatially blind” policy, and the Italian Fabricio Barca, whose 2009 report set EU Cohesion policy on the “place-based” path that it has stuck to ever since.

The Sapir Report was a review of the 2000-2010 Lisbon (growth and jobs) strategy. It argued that the best way to tackle regional disparities in economic performance was to use “horizontal” policies, (which treat all localities the same), in conjunction with free market forces and labour mobility. This would hasten the movement of people out of declining areas with a labour market surplus, towards more competitive cities where there was a greater demand for them.

In contrast, Barca, whose report laid the foundations for the Europe 2020 strategy, advocated differentiated policy, in which each place received assistance tailored to allow it to overcome its disadvantages and develop to the full potential of its unique assemblage of “territorial capital”. Such interventions are intended to break “vicious circles” of decline, and to inaugurate more positive cycles of “cumulative causation”. The key to Barca’s concept of “place-based policy” was the search for ways to realise the potential of local assets and actors, and to kick-start “virtuous circles” of development which are firmly embedded in their locality.

In a rural development context, similar ideas of “virtuous circles” based on all forms of local capital (human, social, built, natural etc) have often been termed “bottom up” or “endogenous development”. The best-known example of policy based on this approach is the EU’s LEADER programme.

Recently these concepts have developed to include ideas about the degree to which rural economies are locally “embedded” or globally connected, and the term “neo-endogenous development” has been coined. Interaction with the wider world brings in knowledge, innovation and market awareness. Local networks provide a mutual support network for entrepreneurs and help to retain added value. Strong local social capital and social innovation are considered the hallmarks of neo-endogenous growth processes.

Essentially there are two strands to rural development policy in Scotland today: The first is the Scottish Rural Development Programme, which is mainly for the benefit of the agricultural sector. Most other aspects of rural policy are said to be “mainstreamed”. In other words, the needs of rural Scotland are assumed to be integral to the design and implementation of a range of “horizontal” policies. The resemblance with Sapir’s “spatially blind” policy is rather striking.

There have recently been some interesting examples of a shift away from spatially blind, towards place-based initiatives in the context of regional development. These include the rolling out of regional growth deals, Regional Economic Partnerships, and the emphasis upon “inclusive growth”, with a territorial twist.

We have argued that in Scotland the term “place-based policy” tends to have a narrower meaning, relating to local institutional networking, than it does in a wider European context, where it speaks of support for local development processes. Ironically there are many examples of world-class good practice in local development in Scotland, but they tend to take place within a separate policy silo from “Community Planning”. Perhaps what is needed to “square the circle” is to find ways to bring together initiatives to improve territorial governance (such as Community Planning Partnerships and the requirements of the Community Empowerment (Scotland) Act 2015), with “community development” activities. For us, this would represent “true” place-based policy, and we would be very interested to hear of examples where this is happening.

This brings us to the question which will frame a subsequent blog post: “What kind of evidence-base does (true) place-based policy require, and how can it be made more easily available for the rural stakeholders that need it?”