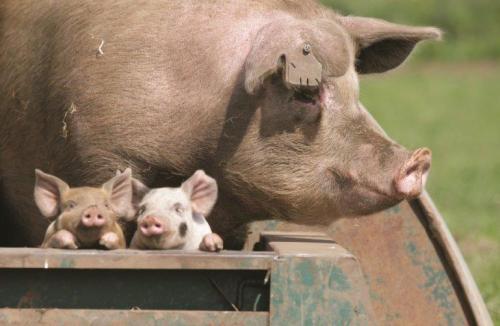 These two organisations represent two extremely valuable sectors of the livestock industry in Scotland, together contributing in excess of £700 million to the Scottish economy annually (Scottish Salmon Producers’ Organisation & Quality Meat Scotland figures, 2017). Much of the livestock work undertaken by SEFARI scientists across the Scottish Government’s Strategic Research Programme focuses on sheep and cattle, so this invitation to contribute to these important stakeholder meetings represented an ideal opportunity for SEFARI to engage with these sectors, to raise the profile of the SEFARI collective and to pave the way for future collaborative ventures.

The ‘Pig Summit’ was designed to discuss and agree what needs to be done to overcome the challenges facing the Scottish Pig Industry and to harness the efforts and skills of the various organisations represented in the room. The meeting started with an introduction to the day provided by Richard Butterworth, Chairman of Scotland Pigs Ltd., and an overview of the Scottish Pig Industry provided by Andrew Saunders, Director of Quality Pork Ltd. This was followed by a very upbeat future look from James Withers CEO Scotland Food & Drink in relation to plans to double the revenue of the sector, as enshrined in the Ambition 2030 Strategy.

This was followed by an equally dynamic presentation from Andy McGowan, Chief Executive of the Scottish Pig Producers Organisation, focusing on the unique selling points of Scottish Pork, including its short supply chain, provenance, authenticity and excellent environmental credentials. There then followed a series of short breakout sessions investigating the main challenges and opportunities for the industry. The former included trade arrangements post-Brexit, and issues around animal health and welfare, but there were real opportunities too in the areas of marketing, growth and innovation and investment in people, skills and the supply chain.

The Scottish Salmon Producers event was a more technical meeting, drawing scientists and industry experts mainly from Scotland and Norway, two acknowledged world-leading countries in aquaculture. There was a series of scientific presentations on aspects of commercial salmon farming, mainly in relation to the control of ectoparasites, specifically sea lice in Atlantic Salmon.

These external parasites live and feed on the skin of infected fish, causing physical damage and secondary bacterial infections, resulting in production losses costing the industry many millions of pounds each year. Control options discussed ranged from integrated sea louse management approaches, to the use of chemical treatments, ‘cleaner fish’ e.g. wrasse and lumpsuckers to remove lice from farmed salmon, mechanical devices for louse removal and barrier approaches, such as fine mesh netting around salmon cages, to prevent sea louse infection.

Philip and Dave had been specifically invited to give perspectives on the use of medicines from the agricultural sector, with a focus on ‘Lessons from livestock’. In this respect, the comparison between aquaculture and animal agriculture is really interesting.

Livestock farmers rely heavily on a relatively small panel of antiparasitic drugs to control a range of internal and external parasites in their animals. In salmon farming, the challenge is around sustainable control of effectively one parasite with even fewer chemicals, some of which are essentially the same as used in animal agriculture. There are things we can do in animal agriculture that can’t be done in aquaculture and vice versa, so we have many lessons to learn from each other in terms of good/best practice for sustainable parasite control.

All in all a fascinating couple of days! We hope to build on existing and new contacts with these two important livestock sectors, so really appreciate the opportunity to engage on areas of mutual interest.