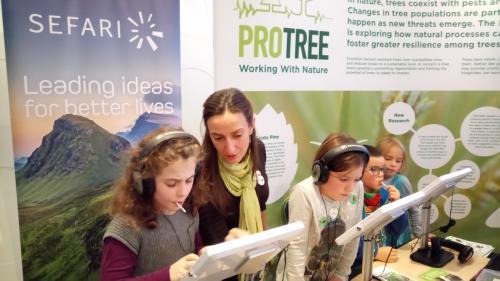 Enlisting people’s help to keep our trees healthy was the task of a team representing SEFARI at the recent science showcase event UnEarthed, held at Dynamic Earth Edinburgh. The event was put on by the Natural Environment Research Council (NERC) to engage the public with environmental science through hands-on activities, and was the largest NERC showcase to date with over 7,000 people visiting between 17 – 20 November.

The showcase was targeted at families and school groups. Two of the four days were advertised to schools in areas of deprivation, and grants were available for transport costs in order to remove the main barrier to attendance.

As well as communicating the science UnEarthed was very much about showcasing best practice in public engagement. All proposals went through a selection process and the support provided by NERC at all stages was exceptional.

So why do we need the public to care about and act on tree health? In short we need more people to be on the lookout for pests and diseases and reporting them so that the authorities can take appropriate action. The UK plant health risk register has around 1,000 threats listed, but the worrying statistic is the rate of growth at between 5 – 10 new pest threats per month. This onslaught of pests and diseases is a product of the modern world where goods and people move ever more freely around the planet.

This threat is particularly relevant to Scotland. We have a strong forestry sector and in recent years around three quarters of all the trees planted in the UK have been planted in Scotland. The Scottish Government also has ambitious targets to increase tree cover for a variety of reasons including economic and wildlife benefits as well as the capture of carbon from the atmosphere. To get people thinking about these issues, a group of seven research institutes including three from SEFARI – Royal Botanic Garden Edinburgh, SRUC and The James Hutton Institute – came together to develop the forest management computer game CALEDON which is free and available to download at home.

Bringing CALEDON to UnEarthed, along with other hands-on activities, was the latest public engagement event for the PROTREE project, a part of the UK's Tree Health and Plant Biosecurity Initiative, which developed the game working with games designers at Dundee-based Hyper Luminal Games. The game puts the player in charge of a virtual forest and they have to make decisions and develop strategy to keep their forest healthy. Planting and felling to maintain a viable business is the basis of the game, but it is how you decide to deal with the inevitable pests and diseases that will determine your success or failure. The game provides tips on strategy and has an encyclopaedia you can explore for more information.

The game was very popular with children and some fierce competition to record high scores suggests that the game does succeed by being fun to play. The game also provides an excellent stimulus to discussion of the issues, as even just getting across the message that trees do get sick is a step in the right direction. UnEarthed was a great opportunity to speak to teachers about using the game in the classroom and for those who wanted to get more involved there was also information available on citizen science initiatives including the Observatree monitoring project, the reporting tool Tree Alert and the OPAL Tree Health Survey.