‘Plant Teams’ on Lismore - Sharing Knowledge Whatever the Weather!

‘Plant Teams’ on Lismore - Sharing Knowledge Whatever the Weather! 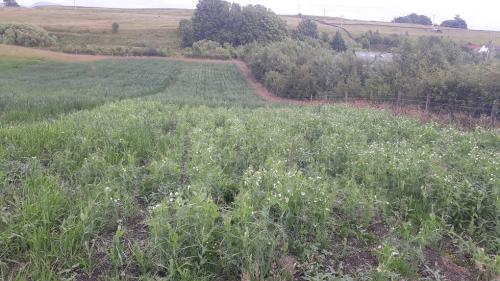 In this blog, we are delighted Dr Alison Karley is able to share with us details of her recent Responsive Opportunity project, during which she visited the island of Lismore to discuss intercropping and the benefits it can have for agricultural sustainability.

The SEFARI Gateway Responsive Opportunity Fund is designed to increase the visibility of the invaluable contributions the Strategic Research Programme makes towards sustainable economic growth and improving the lives of people in Scotland and beyond.

A visit to the island of Lismore on a midsummer weekend sounded idyllic to a group of researchers from the James Hutton Institute and SRUC. The event marked the second meeting of a 'field lab' on intercropping, which we initiated in autumn last year in collaboration with Soil Association Scotland, the Scottish Crofting Federation and the Seed Sovereignty Programme of The Gaia Foundation. When Lismore was proposed as a venue for the event, we jumped at the chance to visit this beautiful island. Our arrival exceeded expectations as Lismore lured us to calm sunny shores one Sunday evening, but the island was determined to make sure we experienced every kind of west coast summer weather by the end of our short visit.

Why were we heading there? Lismore has been the site of one of four field trials carried out this year by crofters and farmers across Scotland to test the performance of intercrops in local conditions and learn the practicalities of growing and managing these crops. Research by Hutton/SRUC scientists and by others has shown that intercropping, i.e. growing two or more crop species together in ‘plant teams’, can improve agricultural sustainability by stabilising or increasing crop yields and creating resilience to environmental stresses. Despite these potential benefits, however, intercropping is not practiced widely in Scotland or further afield, so we were keen to use our knowledge to help crofters and farmers trial intercrops of interest to them in their own farming conditions. Our first 'field lab' event attracted a group of crofters in the Highlands who wanted to trial cereal-based intercrops using heritage cereal varieties. With the trials in the ground by late spring, the visit to Lismore was arranged to share the crofters’ experiences of preparing the soil and sowing intercrops with a wider group of farmers and crofters, and to talk through the subsequent stages of crop management and harvesting later in the summer.

The event on Lismore was held at Baleveolan Croft, generously hosted by Mike Hyatt and Claire Haworth, who have been trialling a pea-oat intercrop alongside the traditional ‘Uist’ mix of bere barley, black oats and rye. We couldn’t have asked for a better welcome as we sailed from Port Appin to Lismore across a tranquil sea and then cycled a couple of miles to the croft in the balmy evening sunshine. First, we visited visit The Sailean Project, a nearby croft where the owners Gilly and Roger Dixon-Spain have spent many years practicing Holistic Management and regenerative grazing methods with excellent results.  By the time we returned to the croft, many of the people attending the following day’s field lab event had started to arrive by train, ferry, bike and car from places as far-flung as Orkney and Wick in the north to Newcastle in the south. Clem Sandison from Soil Association Scotland had already arrived earlier in the day and had prepared a feast of home cooking in the croft’s bunkhouse kitchen. We congregated on the bunkhouse terrace to enjoy the evening meal, undeterred by the smattering of midgies who were determined to do the same.

Monday morning dawned as Lismore showed the flip side of its west coast personality – rain, wind and a ten degree drop in temperature. But there were occasional bright spells between the showers as we congregated in the nearby village hall, where 25 event attendees had gathered. After a short welcome by Clem, Maria Scholten representing the Scottish Crofting Federation and The Gaia Foundation gave a fascinating insight into the history of heritage crop growing in the Scottish Highlands and Islands, and the fantastic work of the Seed Sovereignty Programme to conserve and expand seed resources and knowledge of growing heritage crops. Peter Martin from Orkney College’s Agronomy Institute (University of Highlands and Islands) described the practical advice coming out of his excellent research that has led to the successful growing of bere barley in Scotland for heritage grain products. After a delicious locally sourced (and foraged) lunch provided by Clare and her team, and a brief explanation of the field lab activities to date by Alison Karley and Carolyn Mitchell (Hutton) and Robin Walker and John Baddeley (SRUC), we set off to visit the croft field trial.

The field visit started in a light mist, which progressed to light and then heavier rain, accompanied by an increasing westerly breeze, but the event attendees were a sturdy group and not easily put off by a bit of weather. We discussed crop growth, which was not surprising as it is a little further behind in its development compared with our mainland intercrop trials, we examinined the pea plants for evidence of root nodulation and inspecting the soil condition (as this was the first time the croft soil had been cultivated for many years). When the wind had worked itself up to such a speed that our voices were carried away, we retired to the village hall to warm up and finish the day with a fruitful discussion about what has been learned so far about intercropping by the crofters, the types of equipment and knowledge needed for the next stages of the trials, and how to access practical guidance and information sources. The knowledge held by an older generation of experienced crofters on Lismore has proved invaluable in setting up Mike’s trial and formed a vital part of the conversation.